Each year millions of people visit Europe’s hugely diverse beaches and inland bathing areas, and naturally there is a keen interest in the quality of the bathing waters1. The European Union and its Members States have been working for years to improve water quality. Today Europe’s bathing waters are much cleaner than thirty years ago when large quantities of untreated or partially treated municipal and industrial wastewater were discharged into watercourses and at coastal sites1.

The first European bathing water legislation, presently termed, the current Bathing Water Directive (cBWD) came into force in 1976. Its main objectives are to safeguard public health and protect the aquatic environment in coastal and inland areas from pollution. Bathing waters covered by the directive can be coastal waters or inland waters (rivers, natural lakes and reservoirs) in which bathing is explicitly authorised or where it occurs by large numbers of bathers1.

Since 2012, the UK has been in the process of implementing the revised Bathing Water Directive (rBWD) which uses standards approximately twice as strict as the current Bathing Water Directive (cBWD) and classifies waters based on four years of data instead of one. 2012 was the first year of sampling for the rBWD so the first classifications will be published after the end of the 2015 bathing water season. This means that 2014 is the last time the UK will be reporting results against the cBWD standards2.

These revised standards require different bacterial indicators to be monitored. The UK environment agencies began monitoring for these in 2012, but as four years of data are needed before bathing waters can be assessed, water quality has continued to be reported with regard to the current standards of Imperative (mandatory) and Guideline, using the new indicators (E.coli and intestinal enterococci) in place of the previous indicators (faecal and total coliforms and faecal streptococci), which are no longer monitored3. 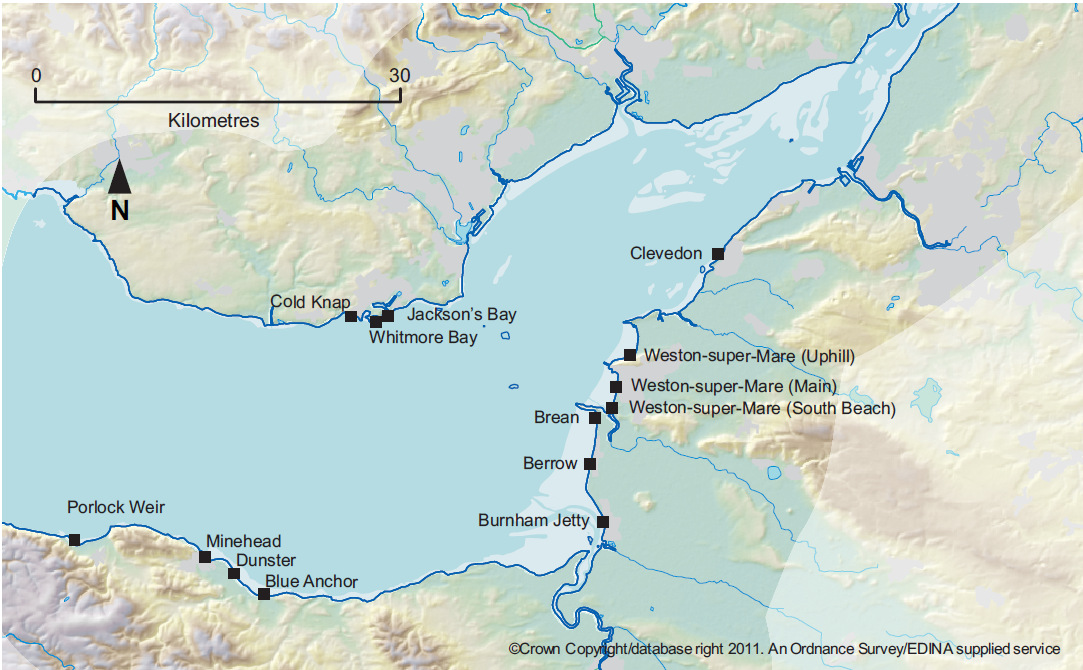 Compliance with the more stringent Guideline standard is not mandatory but the Directive states that member states should endeavour to observe them as guidelines2. 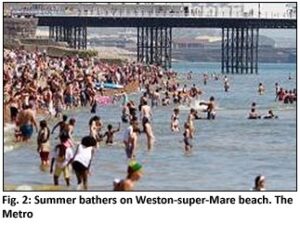 The Environment Agency in England and Natural Resources Wales are responsible for the collection of water samples at the designated beaches around the Severn Estuary (Fig.1) during the bathing water season, which in the UK is currently taken to be from 15th May to 30th September (though sampling commences two weeks before the start of the season)4. Weekly samples are taken from predetermined points where the average density of bathers is usually at its highest. Samples are analysed for a range of parameters for which standards have been set for acceptable amounts. Based on the results, each bathing water site is then given a water quality classification. 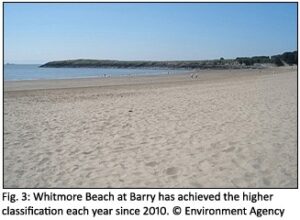 Both of the bathing water directives set standards for the maximum level of bacteria that indicate faecal pollution from either humans or animals. The standards specified in the current BWD fall into two categories; Imperative or Mandatory (minimum) and Guideline (higher). To comply with the Directive, bathing waters must achieve the Imperative Standard. Member States are also obliged to strive to achieve the Guideline Standard that is approximately twenty times stricter.

The maximum levels of bacteria permitted per 100ml sample are shown below. 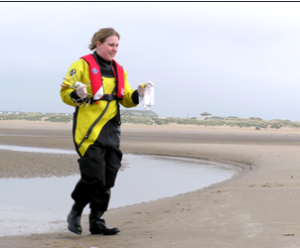 Each bathing water site receives an annual water quality classification following every bathing season; this classification is calculated from 20 samples taken during the season. 2014 is the final year of the current BWD reporting system that allocates classifications based on just one year’s data. 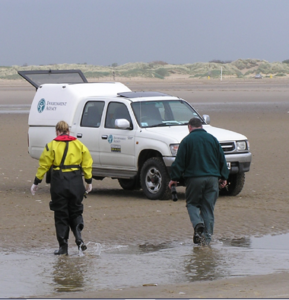 coli (E. Coli) and intestinal enterococci. Field observations are also conducted to assess levels of cyanobacteria, macro algae and other parameters. Bathing Waters will be classified as Excellent, Good, Sufficient or Poor.

Sampling frequency has remained unchanged; however sampling at coastal sites (Fig. 5) is now programmed to occur at different times of the day and at the different phases of the tidal cycle.

The new system also places much stronger emphasis on beach management and provision of public information. From 2011, the Environment Agency and Natural Resources Wales publish Bathing Water Profiles for all bathing waters, a requirement of the revised directive, along with a general description of the bathing water to be displayed at each location. From 2016, the bathing water classification will be displayed at each location using standard symbols (Fig. 6) which will be in use across the European Union5.

Henleaze Lake, situated in the Bristol suburb of Henleaze, 3 miles from the city centre was designated as an EU Bathing Water in 2014. The former quarry is approximately four hundred metres long and thirty metres wide, with an average depth of three metres increasing to six metres under the diving area. The lake is entirely spring-fed and therefore not impacted by any surface watercourse. The Lake is open to members from May to September7. In its first year of designation, the Lake achieved the Mandatory minimum standard and although data for only one year has been collected, it has been given a Sufficient classification under the revised BWD reporting scheme.

There has been significant improvements in the water quality at bathing waters over the last two decades as a result not only of the Bathing Waters Directive but also the Urban Waste Water Directive4; which have resulted in higher levels of sewage treatment around the Estuary. In 2000 none of the Severn Estuary and Inner Bristol Channel designated bathing beaches achieved the higher standard. In 2014, all 15 bathing waters (14 coastal beaches and 1 inland lake) achieved the minimum standard with 8 achieving the higher standard (Table 2).

Improvements to the sewerage system by water companies are ongoing, but variations from year to year tend to relate to weather conditions. During wet weather, combined sewer overflows operate more frequently and diffuse pollution in the form of surface run-off increases from urban and agricultural sources. Poor water quality can also be caused by misconnected plumbing where foul water such as from bathrooms or washing machines enters the surface water drains, and from poorly maintained cesspits and sceptic tanks. In years with below average sunshine water quality is affected as the sun’s ultra-violet (UV) rays kill fewer of the bacteria found in the sea8

One of the long-term objectives of both Bathing Water Directives is for all bathing waters to comply consistently with the mandatory minimum standards. The improvements necessary to achieve this objective has been one of the main drivers behind water company’s planned investment programmes during recent years. Considerable progress has been made, but it is now clear that in some cases non-water company discharges, riverine and other diffuse inputs are causing problems for beach compliance8. Both the Environment Agency and Natural Resources Wales are carrying out work to identify and reduce diffuse pollution and other sources of poor water quality. 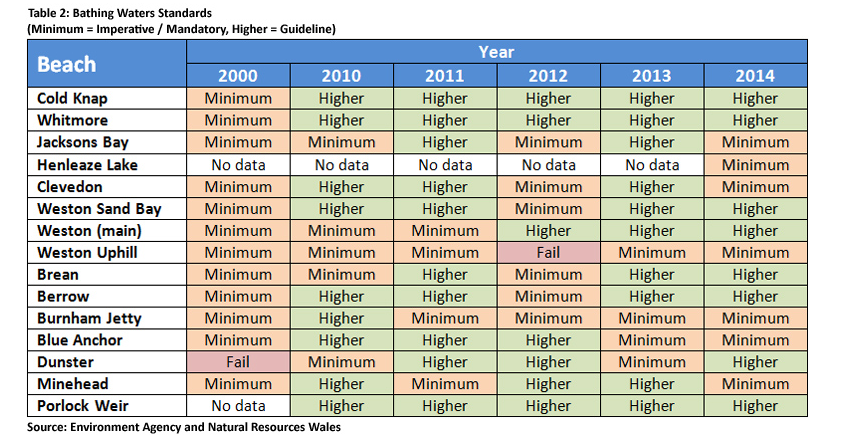 Projected classifications against the new revised BWD standards have been calculated using the 2011-2014 data. Of the 15 bathing waters (including Henleaze Lake) 14 (93.3%) met at least the Sufficient standard, 12 (80%) were at least Good and 3 (20%), achieved the toughest of the new standards, Excellent. 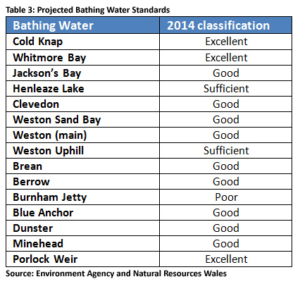 Based on 2011-2014 data, Burham Jetty bathing water was allocated a projected classification of Poor. This bathing water is subject to short term pollution caused when heavy rainfall washes faecal material into the sea from livestock, sewage and urban drainage, principally via the River Brue. At this site the risk of encountering reduced water quality increases after rainfall and typically returns to normal after 1-3 days. The Environment Agency makes daily pollution risk forecasts based on rainfall patterns and will issue a pollution risk warning if heavy rainfall occurs to enable bathers to avoid periods of increased risk; 13 warnings advising against swimming due to an increased risk of short term pollution were issued in 2014 for Burnham Jetty bathing water. These warnings were issued because of the effects of heavy rain on the water quality7.

The Environment Agency has carried out extensive additional monitoring in both the River Brue and River Parrett catchments, alongside the routine bathing water monitoring.  This work has helped to locate pollution problems and a number of site specific improvements. However, due to the continuing sensitivity to heavy rainfall events the Environment Agency continues to work with water companies, local authorities, the farming community, industry and private landowners. 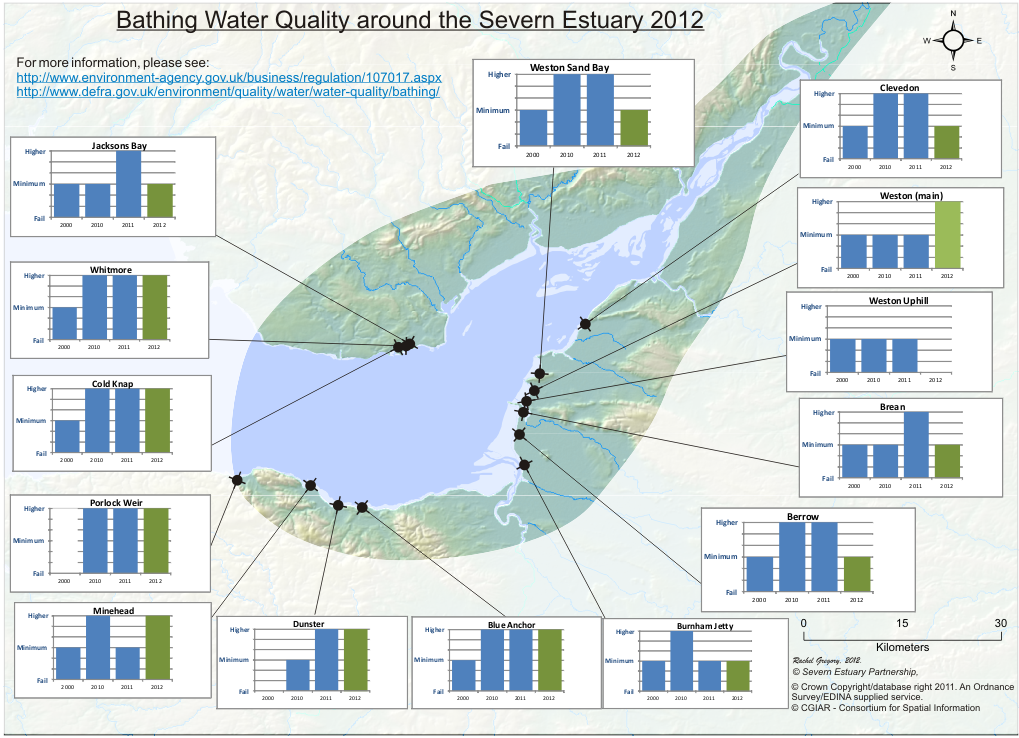 Across European countries there is variation in the bathing season length, and some countries have different season lengths due to differences in traditional bathing patterns and locations.

In 2013, Defra undertook a survey to seek views on whether the dates of the bathing season in England should be amended.  There must be one continuous bathing season per year covering the time of peak usage, although the Directive does not specify any minimum or maximum length for the season.  The current dates of 15 May to 30 September could be amended to lengthen or reduce the season, or could be set on a regional or individual basis. At popular seaside resorts in holiday areas, people may be using the beach and the water for a longer period of the year than at quieter locations, and there may be variations in usage between different parts of the country because of prevailing climate conditions.

The majority of respondents to Defra’s consultation voted to extend the length of the bathing season and as a result, Defra is in the process of producing an impact assessment and seeking the views of a wide range of water users and regulators.

There is no similar review currently being conducted in Wales.