Home About Estuary The Use of the Severn Fisheries

With such a vast tidal range, high turbidity, strong tidal currents and extensive mud banks, fishing for one’s livelihood on the Severn Estuary has always been demanding. The Estuary’s many fisheries evolved to meet these demands, by adopting a variety of fishing methods; some of which are unique to the Estuary.

Historically, most of the fisheries in the area have targeted migratory species, but there has also been a long tradition of catching marine fish and shrimp.

The term fishery (or fisheries) is taken here to be the industry or occupation devoted to the catching and/or selling of fish or other aquatic animals (such as shrimp) and also to the place where they are caught – on a commercial basis.

The level of commercial fishing activity in the Severn Estuary and Inner Bristol Channel is generally much lower than on fishing grounds to the west1 and in comparison to the rest of the UK inshore fisheries, a relatively small amount of catch is landed commercially from the Severn Estuary area2. This is principally as a result of the strong tides, together with the low density of fish above the minimum landing size1. The Estuary acts as an important nursery ground for many commercially valuable species including sole and bass and as a result, the majority of the fish found within the Estuary are juveniles1. 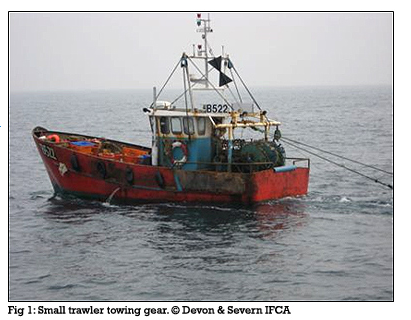 All licensed commercial fishermen must submit sales notes of fish sold2. This is the only source of catch data for vessels less than 10m; however greater statistical data is collected from vessels over 10m in the form of landing declarations and log books. All the data is recorded against the location of catches within pre-defined ‘catch areas’ known as statistical rectangles. The study area is covered by three such ‘statistical rectangles’ with the western-most area stretching from Cardiff to a line between Swansea and the North Devon coast. It is within this area, (which covers only a small part of the Severn Estuary), that 100% (90 tonnes) of the recorded catch was taken in 2010 with an approximate value of £200,000 2.

Whelks dominate the recent landings in terms of total weight, making up over a third of landings (over 30 tonnes) in 20102. This is followed by skates and rays, where thornback ray and small eyed ray form the majority of this species type in terms of both volume and value2. Combined values of skate and rays indicate that they are the most valuable marine fishery in the study area (approximately 32% of the total value in 2010). This is followed by lobsters, bass and sole2.

For the declared catches from 2007 to 2010 the overwhelming majority (approximately 84%) was landed by Welsh registered vessels2 mostly at Swansea and Porthcawl – both just outside the study area. It is possible that some vessels landed catches taken from the Severn Estuary, but no data exists and if they had, it is likely to have been very small in terms of both weight and value. Of the few commercial fishing vessels operating within the Severn Estuary area, all are less than 10m in length and most, if not all, operate on a part-time basis, with many supplementing income through charter angling trips. There are three vessels working part time from Newport, using small beam trawls for flatfish and brown shrimps3. There are two boats operating out of Minehead setting pots and several others also setting pots and nets close inshore, between Highbridge and Burnhamon-Sea in Bridgwater Bay3.
A small number of shore-based fisheries also exist, such as that in Bridgwater Bay where fishermen (again, part time) use stake-nets; catching skate, sea bass and ling in the summer, cod and whiting in the winter and shrimps usually between August and October. It is in Bridgwater Bay where the only remaining mud-horse fisherman operates, using a wooden sledge (the mud-horse) to safely navigate across the mud flats exposed at low tide to access the stake nets4.

Of the migratory fish using the Estuary, commercial fishermen target only eels and salmon. Sea trout are also caught by the salmon fisheries, but in very low numbers and are generally regarded as by-catch. Though shad are still present in the Estuary, the fishery that once rivalled that of salmon in terms of value, ceased decades ago due to declining numbers. Lamprey also use the Estuary on their way upstream to spawn in the rivers, but are not the target species of any fishery.

Eels are found in all European countries bordering or connected to the North Atlantic1. They are caught as juveniles (elvers or glass eels) returning from the sea primarily in tidal waters, or as adults (yellow and silver eels) in a variety of fisheries; the vast majority of which are at sites on inland water bodies.

Elver fishing in England and Wales is concentrated mainly in the Severn Estuary area and principally on the tidal reaches of the Rivers Severn, Wye, Parrett and Usk5, though some estuarine coastal sites are also fished. Only hand-held dip nets are permitted for the capture of elvers1 and the fishing season is short, coinciding with the elvers entering rivers in spring6.

Over the past two decades, catch data from across Europe shows elver populations declining rapidly from the high levels of the 1970s; a situation generally reflected in the Severn Estuary. From the catch returns submitted for the 423 licensed nets that operated within the study area (including tidal reaches) during 2010, a total of 1,127 kg of elvers were caught7 – though a reduction on previous years, this still represents a significant seasonal fishery. Although the numbers of elvers have declined in recent years, the number of licensed nets remains high, reflecting the continued high demand, principally from eel farms in Asia and the Netherlands.

Commercial yellow and silver eel (adult stages) fisheries within the Severn Estuary area have had a long history, but the greater number of fisheries has always been above the tidal reaches in freshwater habitats. The decline of eel numbers has lead to a significant reduction in netting – with no licensed nets operating in the Estuary area in 2010. 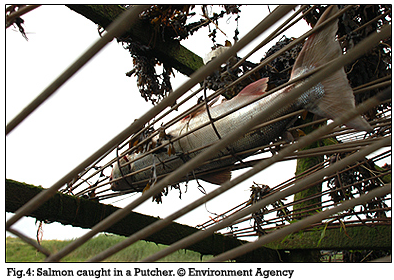 Over the past centuries there have been salmon fisheries around much of the Estuary area, including the lower Estuary such as at Cardiff and the River Parrett in Bridgwater Bay. However, the majority of effort has historically been from Newport upstream. Largely due to declining abundance, many fisheries have ceased to operate and with the closure of both the major drift net fishery upstream of Newport and the Goldcliff putcher ranks (near Newport) since 2000, (with the exception of the lave net fishery at Black Rock Portskewett), all the remaining fisheries lie upstream of Lydney8.

Though fishing by nets and putchers continues, the fishing effort and catches have greatly reduced over the past few decades8. The low abundance of salmon has brought about the cessation of most of the putcher fisheries that typically caught relatively few salmon, whilst a combination of private interests and Environment Agency action has paid others not to fish8 as a measure to conserve stocks. A small number of fishermen continue to operate the few remaining active putcher ranks, up to 5 of which have been licensed in recent years8.
The lave net and draft net fisheries have similarly declined over the past few decades and since the introduction of Net Limitation Orders in 2009, no more than 25 and 3 respectively may be licensed8.

Putchers (see Fig.4) are traditionally, conical baskets about 2m long, made from natural materials (such as willow), but more recently from steel and are fished in ranks (sometimes referred to as fishing weirs6), often containing many hundreds of baskets. Ranks consisting of up to 3 or 4 tiers of baskets are positioned within the inter-tidal zone across the tidal flow. They are usually arranged to fish on the ebb tide; with fish becoming caught as they fall back on the tide and being trapped within the baskets, to then be retrieved by a fishermen once the ranks is exposed at low tide8.

Lave nets (see Fig.3) are large triangular nets, loosely hung between the forks of large hand-held ‘Y’ shaped wooden frames. The fishing takes place on the ebb tide. The fishermen stand in the water up to their waists, lower the net into the water – and wait. They may fish in two ways, either standing in a low water channel waiting for the fish to swim into the net (a practice called cowering) or by watching for a splash or wake of a fish and then running to intercept the fish before it reaches deep water.

Draft nets (sometimes referred to as long-nets9) are similar to conventional seine nets set to encircle and catch salmon8. One end of the net is held at the water’s edge whilst the rest of the net is fed out from a boat as it moves across the river. The far end of the net is secure on the boat and both boat and net drift downstream in an arc to the area licensed to be fished – the draft. The boat then returns to the bank below the starting point. The net is then closed and slowly hauled ashore.

For some of the salmon fisheries, the commercial rewards have become secondary to maintaining the history and heritage of salmon fishing in the Estuary, whilst catching a few fish. For the Lave nets in particular, the cultural significance has been recognised by the Government, whilst aspects of both the putcher and draft net fisheries also provide cases for their preservation as efforts are made to increase stocks. The Black Rock Lave net fishery has taken major steps in recent years to both preserve and promote the cultural heritage of its unique fishing method with the opening of a new net hut (visitor centre) in 2006, in addition to members giving public demonstrations of the fishing equipment.