Home About Estuary The Use of the Severn Maintenance Dredging

In 2016, 2.85 million tonnes of dredged material was disposed at sites within the Severn Estuary area.

Maintenance dredging or navigational dredging is the ongoing or periodic removal of recently deposited material to maintain safe navigable depths of water for shipping.

The majority of ports have to regularly dredge their approach channels, dock basins and locks. Indeed, many ports have a statutory duty to clear and prevent the build-up of sediments in channels and waterways within their respective harbour area. The frequency of dredging can vary considerably between dredge sites, as may the type of material and the removal techniques employed.

Maintenance dredging is a highly regulated activity. The Marine Management Organisation, in English waters, and Welsh Government (administered on its behalf by Natural Resources Wales) are responsible for issuing the appropriate Marine Licences. Though many ports have statutory powers to undertake dredging within their harbour areas, these and all other dredging operations require a Marine Licence for the disposal at sea of the dredged material.

Maintenance dredging differs from capital dredging, which is either the removal of material at a location for the first time (or after a significant period usually greater than ten years) or when a depth greater than previously dredged is required, to accommodate larger vessels for example.

As a result of the dynamic sediment regime and extensive rates of deposition within the Severn Estuary, removal of the material is a frequent and, in some places, an almost constant operation. The main areas requiring the greatest volumes to be removed are generally the approach channels immediately seaward of the ports. Dredging also occurs within the locked berthing basins and, less frequently, at some riverside berths such as on the lower River Usk at Newport. The main navigation channel in the Severn Estuary does not require dredging as it is deep and naturally scoured by the strong tidal currents. Annual disposal tonnages of mainly fine silt from the Severn Estuary ports regularly exceed 2 million tonnes.

The majority of dredging within the Royal Portbury and Avonmouth Docks is undertaken by a suction dredger that discharges the dredged silts via floating pipeline through three fixed outlets directly to ‘dispersal sites’ at the estuary and mouth of the River Avon. In recent years, the total annual tonnage disposed using this method has exceeded 3 million tonnes. This method of disposal is not subject to the marine licensing regime, therefore the volume figures are not included in Table 1 which shows the volumes of material disposed at licensed at-sea disposal sites.

Dredging Methods in the Severn Estuary

Dredgers exist in a wide variety of shapes and sizes, ranging in complexity from a simple grab crane on a floating pontoon to some of the most sophisticated and technologically advanced vessels afloat2. The dredging equipment used is determined by a variety of factors such as site conditions, material type and quantity. By far the most common method used in the Estuary is the trailing suction hopper dredger (TSHD) (Figs. 2 & 3). A trailing suction pipe is lowered to the sea bed alongside the ship and as the dredger moves forward slowly, a mixture of sediment and water is drawn onboard via the draghead, through the trailing pipe by powerful pumps and discharged into the ship’s hold or hopper. This method causes minimum disturbance to sea traffic and is very efficient at channel dredging but is usually unable to operate in confined areas close to quays and jetties.

Grab dredgers (Fig. 4) use a grab (Fig. 5) that is dropped overboard and bites into the sediment under its own weight and closing mechanism. The sediment is lifted and either transferred onto an adjacent barge or the vessel’s own hopper. This method may produce uneven bottom topography but is particularly suitable for working along quays and in harbours3.

Plough dredging (Fig. 6) consists of a plough unit, usually in the form of a metal sled suspended on cables/chains, towed behind a tug or work-boat to drag material from confined areas, such as locks, where a TSHD cannot reach, to a more accessible area. It may also be used to re-profile or level-off the bed3.

A further specialised method is water injection dredging. This technique involves pumping water into the bed material at a low pressure but high volume, in order for it to fluidise and to flow over the bed through the action of gravity to lower levels. Sediments are generally confined to the sea bed, although re-suspension can occur3. The method is regularly employed at Sharpness Docks where fluidised material moves along a gradient to the locks from where it is flushed into the Estuary. 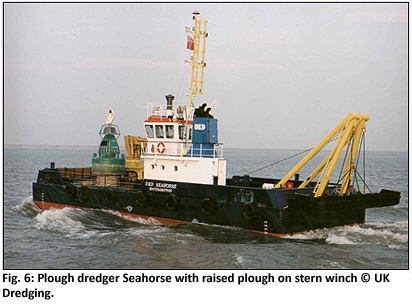 Since the 1980s the disposal of solid waste at sea, such as industrial and colliery wastes and sewage sludge, has progressively been prohibited. Material dredged for the provision of safe navigable depths is the only significant exception and permission is generally only granted when the material is of sufficiently good chemical quality.

Material dredged from the Severn Estuary and its port areas is generally deposited on the sea bed at one of a number of licensed disposal sites within the Estuary. Each port uses a nearby disposal site (or sites), selected by matching the sediment characteristics of the site with the dredged material3. Environmentally, the best option is to disperse the dredged silt and mud in the Estuary where it can be redistributed by the tides, thus preventing a build-up of material. This allows the sediments to remain in the system where they can replenish intertidal habitats4.

Although maintaining the sediment balance within the Estuary is deemed to be important, it is a requirement of many disposal licences that consideration be made of possible beneficial re-use of the material. Due to the poor engineering qualities of the silt, alternatives to sea disposal are very limited and so the non-removal of this material from the sediment system is often seen as being the best environmental option.