Home About Estuary The Use of the Severn Ports & Shipping

Almost all the major towns and cities around the Severn Estuary developed largely as a result of sea trade which brought prosperity and employment to the region1. In the 19th and 20th centuries many established in-river and coastal wharves were replaced with impounded docks more suited to deal with the expansion of trade, larger vessels and the high tidal range. At some, such as Lydney, Gloucester, Bristol City, Portishead and Penarth Docks, trade has long ceased and they now mainly operate to service the recreation sector, as marinas. Others however, still provide a vital conduit for sea trade. These ports and the services they support continue to have an important role in the local, regional and national economy as they are responsible for handling a substantial proportion of UK trade2. The major commercial ports are Bristol (Royal Portbury and Avonmouth Docks), Cardiff, Newport with smaller operations at Sharpness, Barry and Bridgwater (Dumball Wharf)1. 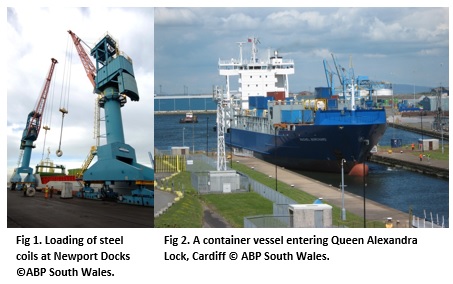 A key factor in the development of the Severn Estuary ports was the need to cater for the vast export trade of the 19th and 20th centuries. Whilst Bristol also handled large volumes of imported goods, trade at other ports, particularly those of South Wales was dominated by the export trade. The changes of fortunes in Britain’s manufacturing and heavy industries, for example, the coal exports of South Wales, were largely responsible for the significant decline in export trade and overall port traffic in the latter half of the 20th century. Trade dynamics changed from exports to imports and now, as with most other British ports, by far the greater proportion of cargo tonnage handled at all the Severn Estuary ports, is imported trade (Table 1). 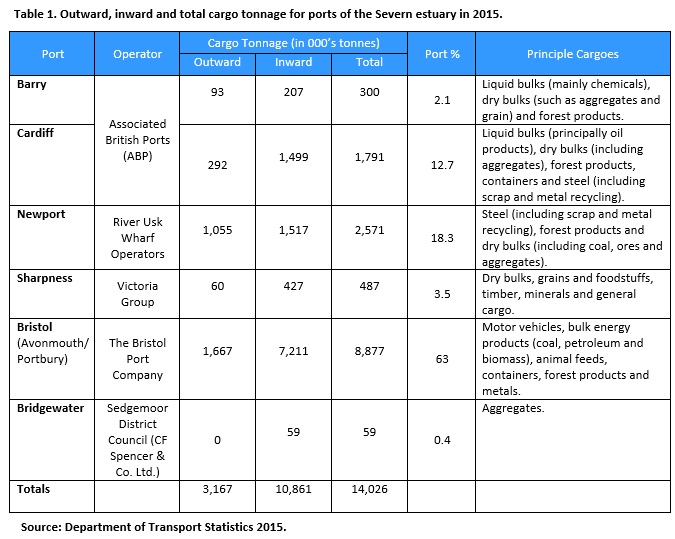 The 2008 recession resulted in the largest year on year decline seen in the last 30 years, when port freight fell by 11% between 2008 and 200910. UK total tonnage levels stabilised in recent years, however, total freight tonnage traffic for the Severn Estuary ports decreased in 2015 by 15.8% to just over 14 million tonnes.

In 2015, the Port of Bristol (Avonmouth and Royal Portbury Docks) handled 63% of the tonnage shipped by the Severn Estuary ports; the port was ranked 14th busiest (by tonnage) in the UK, handling just under 2% of the total UK tonnage7. 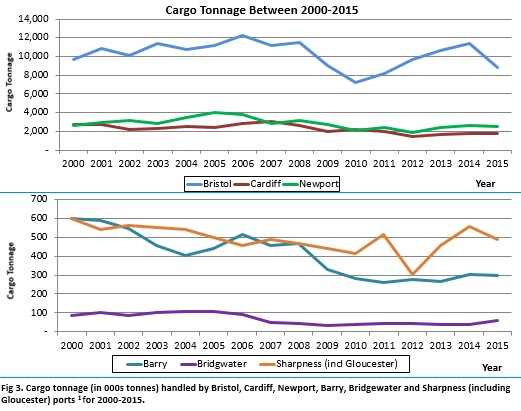 To remain competitive, ports need to constantly adapt to changing markets and developments in both transportation practices and cargo handling technology and many of the ports have invested heavily in new dockside facilities in the last decade5.

In 2014 and 2015, Associated British Ports made significant investment at Newport Docks that included new mobile cranes (Fig. 4), renewable energy projects, a new rail bridge and quay strengthening work. Investment to meet the needs of port customers continued in 2016 with the £2.8 million refurbishment of 3 of the quayside cranes and the commencement of a £2.3 million project to develop new warehousing space (3,500m2) to accommodate increasing agriculture related cargo volume at the port. 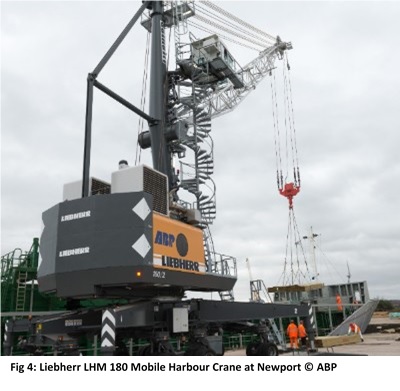 Further developments to expand trade at Newport have occured at Bird Port on the lower River Usk. The privately owned port, operated by Cargo Services (UK) Ltd has taken over a second dock and added to the all weather rail terminal with a new all weather canopy over the dock to enable uninterrupted cargo handling during poor weather.

As a response to the ever present need to remain competitive and the ever increasing use of containers to transport cargo, the biggest port development in the Estuary for a century is being planned for Avonmouth Docks (Fig. 5). In March 2010, The Bristol Port Company was granted a Harbour Revision Order to allow the construction of a new Deep Sea Container Terminal5 along its foreshore.

The development is being designed for future generations of ultra-large container ships carrying up to 18,000 TEU (Twenty Foot Equivalent Units or 20ft containers)6. With a planned 1.2 km of quay and 100 acre storage and handling area, the terminal is expected to have a capacity of 1.5 million TEU’s per year6. 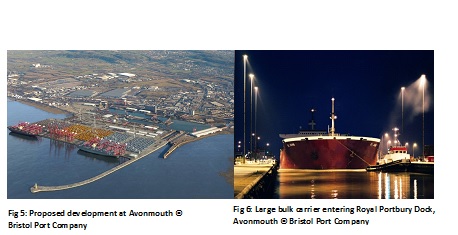 The extreme tidal range within the Severn Estuary (over 14m at Avonmouth, and 10m at Barry on the largest Spring tides) presents a constant challenge to both navigation and port operations. Access to the ports is very dependent on the ships draught and the size of tide i.e. the depth of water. Access to  some ports is often only possible during the incoming high tides, and though the extremely high spring tide levels provide suitable conditions for very large ships with deep draughts, ships have to time  their arrival in the Estuary to coincide with suitable tide conditions.

A further potential constraint to each port’s operations is the maximum size of vessel which can be received in its locks. Apart from Royal Portbury Dock, which was completed in 1977 (with the largest entrance lock in the UK5), all the impounded docks and their locks were built over one hundred years ago, when vessel sizes were far smaller. This restriction is likely  to have a significant bearing in the type of business a port can attract and how it may adapt to future changes in maritime trade (Table 3).

The use of river wharfs such as at Newport and Dunball (Bridgwater) continues, and though the use of locks is not an issue, there remains the need for careful consideration of tide conditions.

Cargo vessels come in greatly varying sizes and designs with many ships now built to carry a specific cargo type. The wid 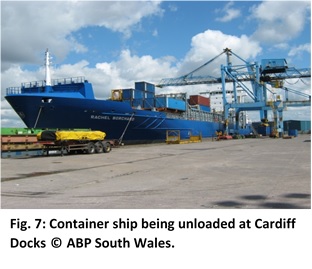 The Bristol Bulk Terminal can receive very large ships, with the largest vessel docked to date being the St. John at 128,000 tonnes deadweight (Fig. 6) (see ‘deadweight’ definition below). However, the majority of ships calling at the Estuary ports are far smaller with 83% of the 2015 traffic being less than 20,000 tonnes and 66% under 5,000 tonnes (Table 4).

Deadweight tonnage (abbreviated to DWT) is a measure of how much weight a ship is carrying or can safely carry; it does not include the weight of the ship.

In terms of shipping classification based on cargo type, 64% of the ships in 2015 carried ‘dry cargo’, 8% were tankers carrying liquid cargo, and 6.8% were dedicated container ships. From Table 5 below it can be seen that 674 (18.8%) vessel visits have been classified by the Department of Transport as ‘Other’; a large portion of this figure is attributable to aggregate dredgers and tug traffic, and possibly also dredgers undertaking maintenance activities.

Ro-Ro or Roll on – Roll off is the term given to ships designed to carry wheeled cargo such as vehicles and trailers that are driven or towed on and off the ship. RoRo vessels have built-in ramps that allow the cargo to be efficiently rolled on and off the vessel within port. 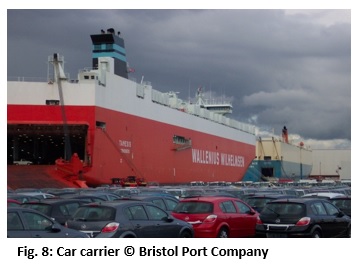 navigable depths2. A number of ports have to regularly dredge their approach channels, dock entrances, locks and  dock basins. Every year, several hundred thousand cubic metres of material is removed from each of Cardiff, Newport and Royal Portbury/Avonmouth Docks. The disposal of maintenance dredged material at sea is a highly regulated activity with volumes capped by licences and use of dedicated disposal sites. The main navigation channel in the Severn Estuary does not require dredging as it is deep and naturally scoured by the tidal currents. For more information, see the separate section on Maintenance Dredging.