Home About Estuary The Use of the Severn Tourism & Recreation 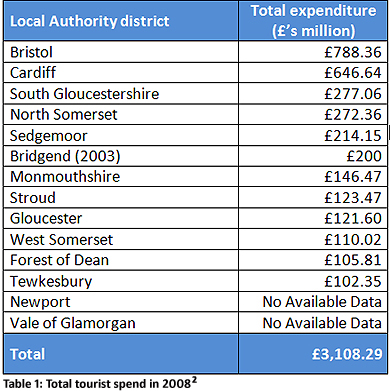 Tourism contributes 9% to the UK’s GDP and is one of the largest service industries around the Estuary. In 2013 it was estimated to be worth £127 billion to the UK economy (including direct and indirect impacts)1.
Coastal tourism is continuing to increase around the Estuary. In 2008, over 49.2 million visitors contributed towards a total tourism associated expenditure of over £3,108 million in the Severn Estuary region2. Table 1 summarises the total tourism expenditure within each local authority district in 2008. The high values for Bristol and Cardiff are not surprising given the wide range of tourist attractions in these cities and their waterfront areas.

The Development of Tourism on the Severn

Historically, certain settlements within the Severn Estuary region have been extremely important for development of traditional coastal tourism. These include the seaside resorts of Barry Island, Weston-super-Mare, Penarth, Clevedon and Burnham-on-Sea.

The 19th century saw Weston grow from a tiny village of about 100 inhabitants to a thriving Victorian seaside resort of nearly 20,000 people following the opening of the Bristol and Exeter Railway in 1841. Weston-super-Mare’s Grand Pier was originally opened in 1904, and following its destruction in a fire in 2008, was re-opened in 2010 attracting over 52,000 visitors on its re-opening day (Fig. 2).

Weston-super-Mare is still a popular tourist location, with attractions such as the SeaQuarium, Weston-super-Mare Museum, the Helicopter Museum and seasonal Wheel of Weston3 and the Waverly paddle steamer. In addition, Weston Beach provides an expansive area for both wind and water sports4.

Further tourism attractions at Weston-super-Mare are planned, with North Somerset Council giving planning approval to the £50 million Leisuredome in 2011. Once complete this will house the longest indoor ski slope in Europe5.

Tourism began in Barry Island as early as 1876, when J.D. Treharne built a Pier on the island to enable passenger boats to land. In the first year the pier opened, over 15,000 visitors flocked to the island.

The extension of the railway line to Barry Island in 1896 substantially increased the visitor numbers; with 100,000 people arriving throughout the 1890’s. The railway still provides access to the resort today. Tourism on the island soared over the following 100 years, with the development of many amenities and attractions, however as with many coastal resorts in the UK, it faced a decline in popularity during the 1970s from overseas competition.

In recent years the Island’s popularity has grown once more, with visitors attracted by the opening of the Barry Island Pleasure Park and the use of the island as a set for the filming of popular TV programmes Gavin and Stacey, Dr Who and Being Human.

Tourist Features of the Severn

The tourism industry continues to be of great importance to the Severn Estuary with the traditional resorts as well as the modern tourist attractions and large scale waterfront developments of Bristol and Cardiff. 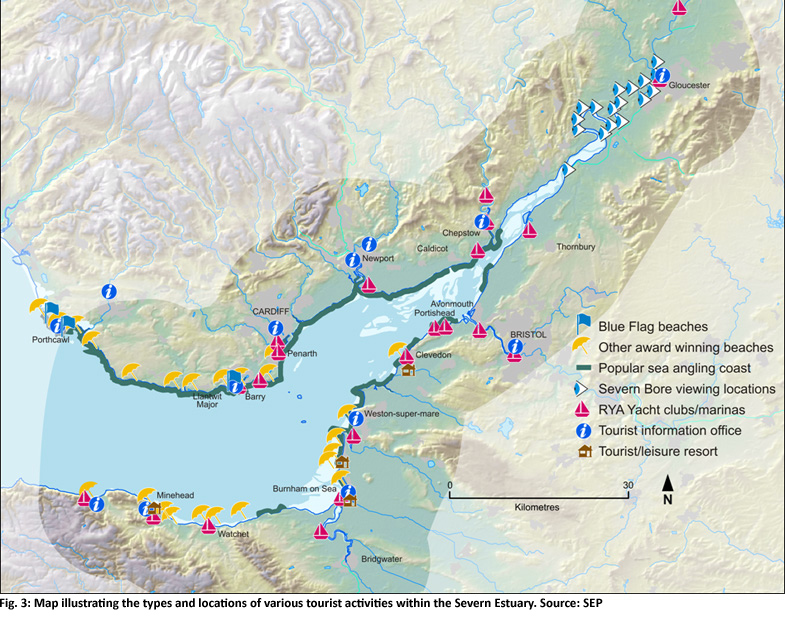 The shores around the Severn Estuary are very popular locations for camping and caravan holidays. The stretch of coastline between Burnham-on-Sea and Kewstoke has the highest concentration of campsites in the Estuary region. (Fig. 4).

Attractions of the Severn 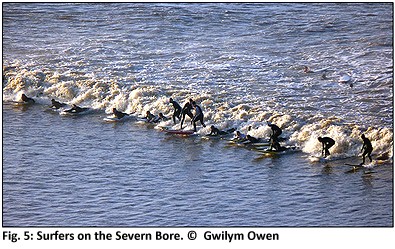 The Severn Bore is one of Britain’s spectacular natural phenomena (Fig. 5). The Severn Bore is a large tidal surge wave that can be seen moving up the Estuary of the River Severn at speeds of up to 21 kilometres per hour at some locations. The Bore attracts thousands of visitors every year to view the spectacle and some even attempt to surf the Severn Bore. The Bore occurs throughout the year, but varies in height and strength with the tides and seasons. Bore times and heights are however predicted in advance and can be viewed by clicking here.

The Severn Way is a long distance path along the River Severn from its source in Plynlimon. The trail is 337km (210 miles) from start to finish, making it the longest river walk in Britain (Fig. 6).

There has been interest in the installation of ‘counters’ at various places along the Severn Way walk in order to establish how many visitors a year use this popular route7.

The All Wales Coastal Path

The Severn Estuary forms a part of the All Wales coastal Path route. At 1,400Km (870 miles) long, the All Wales Coastal Path is a true challenge to walk end to end. Fortunately, this long distance path is available to walk as much smaller routes. Suggestions for routes and their distances can be viewed here.

This nature reserve offers a haven for wildlife on the edge of the city and is a great place for tourists who wish to see the brilliant views of the Severn Estuary and its nature all year round (Fig. 7).  Newport Wetlands is a partnership between National Resources Wales, Newport City Council and the RSPB.

Although there are always plenty of birds present at the wetlands, some are only seasonal visitors.  Click here to see what bird species are currently migrating to the Newport Wetlands.

Bristol is the major city of the south-west of England with a growing population of 428,234 as of 2011. Its waterside location, lined with historic buildings, tourist attractions, boats and restaurants makes a popular year round tourist destination for over 9 million visitors each year9 (Fig. 8). In 2008 alone, tourists brought £788.36 million into the city and its attractions2.

Bristol Harbour was the original Port of Bristol, but as ships and their cargo increased in size, commercial port operations moved to Avonmouth and Portbury docks. The harbour is now a bustling tourist attraction with museums, galleries, exhibitions, bars and nightclubs.

Former workshops and warehouses have been converted or replaced by cultural venues, such as the Arnolfini art gallery, the Watershed Media and Arts Centre, the new Museum of Bristol, “M Shed”, the At-Bristol science exhibition centre and the Bristol Aquarium attracting both local residents and tourists alike. Museum boats are permanently berthed in the harbour. These include Isambard Kingdom Brunel’s SS Great Britain and a replica of the Matthew (Fig. 9) in which John Cabot sailed to North America in 1497.

The Bristol Ferry Boat Company and Number Seven Boat Trips operate ferry services in the harbour, serving landing stages close to most of the harbour-side attractions. The Bristol Packet boats offer regular harbour tours with commentaries and river cruises up the River Avon to Conham, Hanham and Bath and downstream to Avonmouth.

In late July each year, the Bristol Harbour Festival is held, resulting in an influx of boats, including tall ships, Royal Navy vessels and lifeboats.

Born in 1974, and taking street art in Bristol by storm in the 80’s, Banksy is now a world famous artist; with artwork found in London, LA, New York and of course, his home of Bristol. 2009 saw thousands of people queuing for hours to view a brilliant free Banksy exhibition, held at the city’s Museum and Art gallery. Today, permanent pieces of his street art can be seen throughout the city.

The city has a population of 346,090 as of 2011 and boasts over 125 hotels, 73 restaurants, 149 pubs bars and nightclubs (18 of which are on the waterfront), Cardiff Castle, the 56 hectare Bute Park and the Millennium Stadium. In the first six months of 2010 alone, more than 10 million people visited Cardiff, an increase of 3 million from the previous year.

A tourist survey conducted in 2009 highlighted the 2000 year old castle as one of Wales’ top heritage attractions and a site of international significance; with 80% of overseas visitors stating that seeing Cardiff castle was their main sightseeing priority12 (Fig. 10). The history of Cardiff Castle dates back to its use as a Roman Garrison and later as a Norman stronghold. The castle has even undergone a gothic transformation in Victorian times13.

Cardiff Docks was once the world’s largest coal exporting port, but fell into decline from the mid 1920’s following the UK general strike, the Great Depression of the early 1930’s and a fall in the demand for Welsh coal15. In 1987, to counter the effects of the lingering economic depression in this area, the Cardiff Bay Development Corporation was created to regenerate the dock area. Now known as Cardiff Bay the area has undergone extensive regeneration. The Cardiff Barrage now impounds the River Taff & Ely to form a large freshwater lake. Cardiff Bay is one of Europe’s largest waterfront developments with a wealth of leisure activities available both on and off the water. These include:

The Impact of Tourism

In general, tourism can bring many benefits to an area, but can also be responsible for some negative impacts, such as damage to the landscape from litter, traffic congestion and recreational activities disturbing sensitive habitats or species16.   Such impacts need careful management to ensure that the benefits outweigh costs.

Sustainability is felt to be the key to successful continued tourism in the Severn Estuary region and is promoted by relevant authorities on both the English and Welsh sides of the Estuary. Since 2008, the South West Tourism Alliance has continued to work in close partnership with the independent charity Sustainability South West on the English side of the Estuary to offer support to the tourism sector. Support is given to the tourism sector through:

On the Welsh side of the Estuary, Visit Wales provide similar support and advice on how the tourist industry can become more sustainable. More on sustainable tourism can be viewed here.