The Severn Estuary is commonly considered to have the second highest tidal range in the world after sites in the Bay of Fundy in Canada. This is a result of its shape and alignment. The alignment of the Bristol Channel is predominantly east-west, and that of the Estuary is north east-south west. This change in direction is enough to change the dynamics from wave-dominated in the wider Severn Sea to the west, to tidally-dominated in the upper Estuary. As a result of a combination of geology and human intervention through the draining of the Somerset Levels and coastal engineering works, the Estuary is funnel-shaped. This, together with the westward facing direction and the flattened Estuary floor, magnifies the already ‘macrotidal’ (over 6m range) tidal range at the Bristol Channel which (on a mean spring tide), approaches 12.2m at Avonmouth and 12.3m at Beachley1. In the Estuary’s swiftly narrowing funnel form, the tidal flow overcomes the resistance of the Estuary bed, producing a tidal bore2.

A bore is unique to macrotidal estuaries and occurs at spring tide when the incoming tide breaks against the outgoing river current, forming a wave that travels up the Estuary. The Severn Bore forms upstream of Sharpness and travels upriver at about 16 kilometres per hour. It can form a wave up to two metres in height (see Fig. 1). Although it is associated with spring tides, its height varies with tidal and meteorological conditions.

The North Atlantic Oscillation (NAO) refers to the pressure gradient between the Icelandic low and the Azores high. During the positive phase, the Icelandic low is very low and the Azores high is very high, creating a large pressure gradient3. This drives strong winds east across the Atlantic to Europe and the UK tends to have warm wet winters (see Fig. 2). During the negative phase, the pressure gradient is much smaller, which blocks the jet stream and forces it upwards. As it travels over high latitudes before reaching the UK, winters tend to be much colder and drier (see Fig. 3). The NAO strongly influences the winter weather over much of the northern hemisphere3,4.

The NAO can switch between positive and negative modes over a matter of weeks or can remain in the same mode for years4. There does not appear to be a trend in NAO variability, which makes it extremely difficult to predict or account for in climate predictions4.

Changes in the NAO impact on the strength and tracks of depressions over the UK including the Severn Estuary and influence wind speed and direction together with associated wave heights. 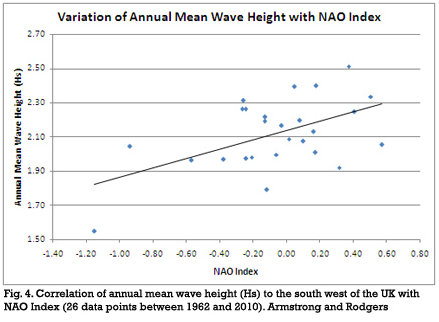 Ocean surface waves are generated by the wind blowing over the surface of the water and their size depends on three factors: the wind speed, the length of time the wind blows for (duration), and the distance over which the wind blows (fetch). Wave height is usually described using ‘significant wave height’ or Hs, which is the average height of the highest 1/3 of waves within a time period5. Waves are affected by wind speed and direction and storm intensity, track and speed has been shown to significantly affect the maximum wave heights6. The annual mean significant wave height to the south west of the UK has also been shown to have a positive relationship with the annual NAO index (see Fig. 4)5,6.

Wave height has increased over the past 25 years as observed from in-situ and altimeter records. This has been linked to the positive state of the NAO which corresponds with stronger westerly winds6. However, this rise in wave-height may be part of a long-term natural variability7. A recent study has indicated that significant wave heights in the south west of the UK have decreased over recent years, which has been linked to a decreasing trend in the NAO5.

Future changes to wave heights cannot be predicted accurately at this time as there is no consensus on the future storm and wave climate for north-west Europe7 (IMCORE Report Card 3 – LIVE LINK); however climate models generally suggest the NAO is likely to remain in its positive phase, leading to further increases in wave height6. Changes in the extent of sea ice may also impact wave height as it will affect the area of open water and therefore the fetch for wind-generated waves6.

Wind direction is affected by the NAO (see Fig. 5) and can have significant impacts on coastal erosion. This is because it determines the direction of wave attack, and can lead to a temporary increase in sea level7. 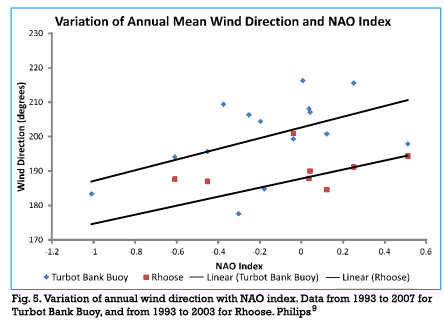 The potential impacts of changes to wind direction were illustrated by the structural failure at Penarth during 1997 and 1998. As this coincided with the construction of key components of the Cardiff Bay Barrage, these were cited as a cause of the extremely high levels of erosion along with offshore marine aggregate dredging. However, recent research has shown the period of erosion occurred following a time of significantly higher sea levels and a change in wind direction. The increased easterly component caused the wind to approach the beach from the sea, leading to higher levels of wave attack although there were no significant changes to wind speeds. The beach recovered from 1998 onwards despite completion of Cardiff Bay Barrage and continued dredging, which confirmed the erosion and structural failure was not due to human impacts8.

Changes to wind direction are likely to result from variation in the NAO, so it is not possible to accurately predict future trends at this time. 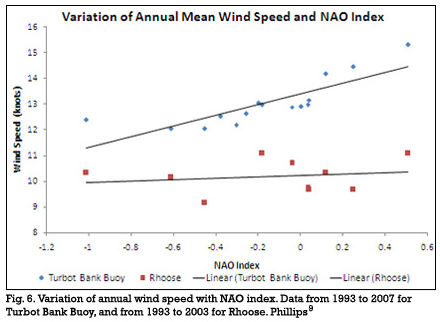 Wind speeds can influence wave height and sea levels, especially in locations such as the Severn Estuary where the impacts of funnelling can be significant. Interestingly, decreasing wind speeds can lead to increasing wave heights due to the increase in dynamic fetch6.

Current Findings: Surface wind speeds have decreased by 5-15% since 1980 over the continental northern mid-latitudes, a trend which appears to be set to continue in the future10. In Cardiff, a recent study has shown wind speeds have decreased by approximately 12.5% over the past 25 years11. This may be related to negative NAO values, as a negative NAO index is associated with less windy, colder and drier conditions over northern Europe (see Fig. 6)9. Climate change and urban development have also been suggested as possible causes of the stilling, with land use change and increase in biomass possibly responsible for 25-60% of the change10.

The full range of impacts resulting from decreasing surface wind speed cannot be predicted without a greater understanding of the climatic system; however it is likely there will be less risk of storms and storm surges. There is also likely to be negative impacts on production of wind-and wave-based renewable energies11. 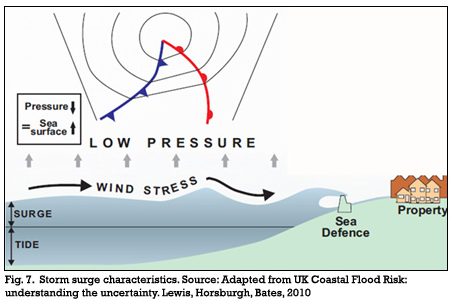 Storm surges pose a major risk, producing higher than normal sea level and flooding for land adjacent to the coastline. These are usually produced when low atmospheric pressure is associated with very strong winds and high tides. While rare in their extreme form, these can overtop or breach sea defences and cause flooding and erosion depending on the exact weather conditions at the time8. If the wind direction is from the west or south west this results in a wind generated flow both constraining and pushing water up the Estuary, causing the water level to rise further (see Fig. 7) (IMCORE Report Card 5).

The storm of 1990 resulted in a rise of water level at Avonmouth of 1.6m at the time of high tide. The storm caused damage to sea defences and properties along the Estuary.

Storm surge predictions are used when deciding upon coastal defence systems, but the difficulty is in knowing what will happen in the future. Some climate models predict that in the UK the number of storms over time will stay the same or reduce, but it is impossible to predict what will happen to the intensity of individual storms.

In addition to storm surges, the impacts of more localised winds increase coastal risk. An example is the impact of north-easterly winds on the coastline near Penarth Head in Wales. When the wind is from the north-east, this section of coastline is exposed to a large fetch in the same direction and significant erosion subsequently occurs12 (IMCORE Report Card 5) (SOSER REPORT CARD M&O:1; M&O:2; M&O:3). 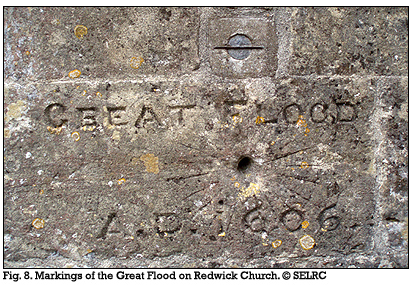 There has been much discussion about the flood that took place on the Severn Estuary in the early seventeenth century. The event is marked on churches on the Gwent and Severn Levels and it has been suggested that up to 2000 people may have perished. Although modern day calendars place the flood in 1607, calendars in use at the time of the event would have documented the flood as occurring in 1606 (see Fig. 8).

Whilst one theory suggests that a tsunami was responsible, it is known from contemporary accounts that the flood happened at about 9am local time and that the high tide for that day is estimated to have been at 08:358. In addition, eight of the nine sources of data for the flood state that the weather was also stormy. Astronomical prediction software shows that the Moon and Sun were close at New Moon making these tides among the highest of the year. While a full explanation of this flood may never be known for certain, a storm surge is likely13.