The marine environment of the Severn Estuary is one of the most dynamic in Europe, with changes in sea level, waves and storms all playing their part in shaping this coastline. Historical records show that severe storms have caused much coastal erosion and flooding and modern research suggests such events are likely to occur again in the future. Perhaps one of the biggest threats to the Estuary is from rising sea levels which, coupled with a significant storm event, could exacerbate the effects of coastal erosion and flooding and cause significant issues for coastal planners, engineers and local communities. The Severn Estuary coastline is already considerably defended, especially around the Wentlooge and Caldicot levels and the Somerset Levels, with several small scale localised defences existing elsewhere.

Changes to the local climate of the Severn Estuary will have impacts on its social, economic and natural characteristics and it is therefore important to understand these changes for effective adaptation. Current research and evidence from the Estuary suggests that air and sea temperatures are rising in line with global trends1. Local impacts of particular concern include coastal flooding and erosion. A significant proportion of critical infrastructure such as roads, rail tracks, power stations and industrial developments are located on low lying land within the Estuary and as such, are potentially at risk from these impacts1.

A recent comprehensive review2 of tide gauge data for the Severn Estuary and Bristol Channel conducted over 15 years (1993 to 2007) concluded that there had been a rise in mean sea level. The review suggested a rising trend in sea level of 2.4mm/year-1, which is in line with other climate change research results3 and UK Climate Projections 20094. Local research estimates that by 2080, sea levels at Cardiff will be 30-40cm higher than 1990 baseline level1 (see Fig. 2). 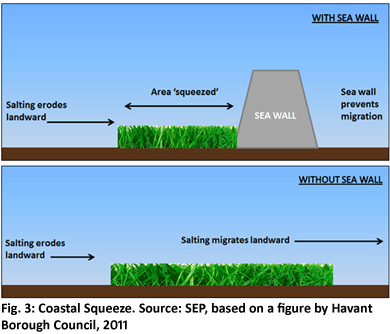 Seasonal average and extreme waves are generally projected to increase slightly to the south west of the UK, including the Bristol Channel and Severn Estuary, which is consistent with rising sea levels5. Models suggest that coastal squeeze (see Fig. 3), habitat loss, coastal erosion and the steepening of intertidal (beach) profiles will all increase in the future due to both sea level rise and possible changes in wave conditions5.

Numbers of severe wind storms in the UK have increased since 1960; however they have not increased above le 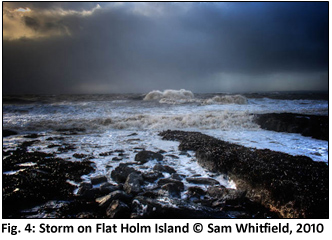 vels recorded during the 1920s4,6 (a particularly stormy period). Recent local research in 2008 has supported this trend7. Projections are uncertain and there is no consistent indication of any change in storms near the UK in either Met Office or other weather models. Such changes are seen as relatively modest, and the potential for substantial changes appears to be small7.The Bristol Channel and Severn Estuary are likely to see an increase in storm surge height of about 0.8mm/year4. Although only a small increase, when taking into account sea level rise, this could exacerbate the impacts of flooding and erosion.

The nature of rainfall over the Severn Estuary has changed over the last 30 years and is likely to continue to do so, with seasonality of rainfall becoming increasingly important10,11. This has consequences for river and groundwater levels and possible issues related to future land use and catchment management. However, the UK exhibits highly variable storm and rainfall patterns12 and, as of yet, there are no clear trends of change in annual mean rainfall levels13. Some research suggests that between 2040 and 2069, average summer rainfall levels may decrease by about 18% and average winter precipitation may increase by around 12%13.

UK marine air and sea surface temperatures have increased by about 0.7°C per decade since the 1980s, with strong regional variations13. By 2080, the average temperature in winter is projected to increase by about 2.8°C and the summer average temperature by about 3.9°C13. By the mid century the Severn Estuary may have warmer drier summers and milder wetter winters.

There are many potential direct and indirect impacts of climate change, as illustrated in Fig. 5. 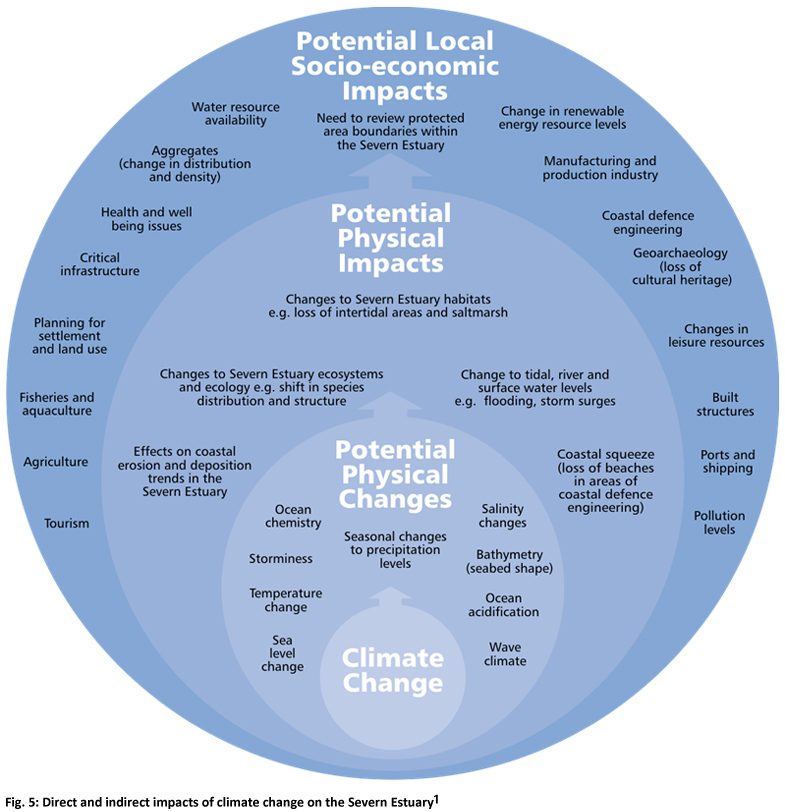 Impacts on the human environment

Socio-economic losses – Significant urban development’s and critical infrastructure on low-lying parts of the Estuary need protecting from flooding and the erosive impacts of severe storms; in conjunction with the continued effective maintenance of current coastal defences14.

Tourism – There may be potential for increased tourism within the Severn Estuary region in the summer months; however this could put strain on existing resources unless adequately managed (see section on Tourism & Recreation).

Agriculture – There are possible adaptation issues for the agriculture industry within the Estuary, in terms of soil quality and types of crops that will grow in a new warmer climate with a longer growing season15,16.

Impacts on the natural environment

Changes in habitats, ecosystems and ecology – Higher air and sea surface temperatures across the Estuary, along with variations in salinity and chemistry, could affect coastal and marine ecosystems as species try to adapt. This in turn can lead to habitat loss and changes to migratory species. Reduced sediment supply, (due to coastal defence construction associated with climate change adaptation), may further exacerbate such habitat losses17. A knock-on effect of such changes in habitat, could be a review of protected area designations at national and international levels.

Intertidal mudflats – Mudflats comprise a large proportion of the Severn Estuary intertidal habitats and can be closely interlinked with salt marsh habitats and the protection from the erosive power of wave energy these can provide. Climatic drivers are changing the landforms of open coast sediment systems via increasing wave height, storm surges and increased water depth17. However, it is not yet possible to accurately identify the various effects of climate change, such as temperature and sea level rise, from other factors such as damage caused by human activities (e.g. scallop fishing gear and bait digging) which also impact negatively on mudflat habitats17.

Seagrass beds – The species Zostera noltii prefers a low salinity environment for germination. Increased freshwater runoff in recent years may have been the driver for the increased success of this species in Welsh seagrass beds17 (including the Severn Estuary and Bristol Channel).

Major limitations in data and information

It should be noted that there are significant issues associated with gaps in the information base in predicting impacts from climate change; particularly with respect to the social and economic characteristics of the Estuary. Severn–specific scientific predictions of climate change impacts are also limited by monitoring deficiencies and information gaps; as noted in recent meetings of the Severn Estuary Climate Change Research Advisory Group.