Poor air quality caused by pollution can have significant adverse effects upon human health and ecosystems. Pollutants can be in the form of solid particles, liquid droplets, or gases. They may come from natural sources (such as volcanic eruptions) or man-made, such as power generation, industrial processes and transport emissions.

Many of the air pollutants have known adverse health effects above certain concentrations. In recognition of the potential harm, there has been a variety of legislation introduced over the last two decades, including European Directives, national strategies and regulations. The most recent, were the Air Quality Standards Regulations, which came into force in England and Wales in June 20103. These Regulations consolidate previous legislation and set health-based standards and objectives for eight key pollutants. 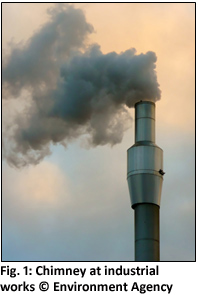 European Directives’ limits and target values have been incorporated as objectives within the UK Air Quality Strategy (2007) and the Air Quality Standards Regulations (2010). As each substance has different impacts, the standards set for each substance are different. Some substances have an impact on health in the short term, and so the standards set maximum levels for any 15 minutes, one hour or daily period, depending on the substance. Other substances have impacts on health in the longer term, and so the standards set annual maximum levels5. An exceedence of a standard is a period of time (defined in each standard) where the concentration is higher than that set down by the standard6.

The Environment Agency (EA) regulates the release of air pollutants from large or more complex industrial sites and local authorities have the responsibility of ensuring that standards are met at a local level by monitoring smaller industrial processes and ambient air quality. 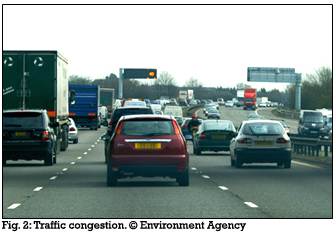 Operators of the EA regulated sites must measure the amount of emissions of each controlled substance every year. They must also specify “notifiable” releases. These are where there has been an emergency, mismanagement, accident or plant failure which has caused pollutants to be released7. In 2010, there was only one notifiable release reported at a regulated site around the Estuary – the release of five tonnes of sulphur oxides from an installation on the South Wales coast7. There was no direct contribution from any of the sites to any Air Quality Objective level exceedances. Fig. 3 shows 2010 emission levels for 4 of the principal pollutants around the Severn Estuary area. 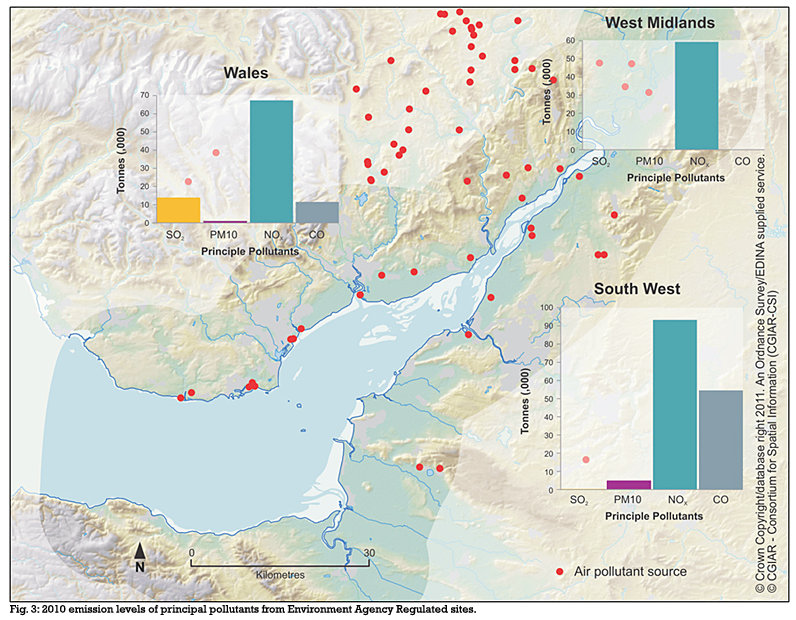 Currently the majority of air quality problems, within the Severn Estuary area as it is nationally, are largely related to emissions from road transport, on major highways and within conurbations generally8. Road traffic is an important source of carbon monoxide, nitrogen dioxide and volatile hydrocarbons (VOCs) such as benzene and 1,3-butadiene and primary particles (PM10). Concentrations of all these pollutants are therefore usually highest in built-up urban areas1, particularly during periods of poor atmospheric dispersion.

The Environment Act 1995 made provisions for local authorities to assess the air quality in their area and compare it with national objectives for certain pollutants. The Act introduced the concept of Local Air Quality Management and as such local authorities are under a statutory obligation to review and assess air quality in their area according to the Standards and Objectives contained in the relevant Regulations4. If problems are identified in meeting the objectives for any of the pollutants the local authority is required to declare an Air Quality Management Area (AQMA) and produce an action plan to tackle the problem. Of the 16 local authorities which operate within the Severn Estuary area, 7 local authorities have declared one or more AQMA due to poor air quality. All of the 19 AQMA were declared for the exceedance of nitrogen dioxide objectives due to emissions from road transport, with the Bristol City Centre AQMA being established to monitor both nitrogen dioxide and particulate matter, (see Table 3).

It should be noted that the size of AQMAs listed in Table 3 vary considerably, as does the number of households potentially affected. For instance, the one AQMA in Bristol covers much of the inner city area, yet the seven AQMAs in Newport have a total combined population of only 135 people19. 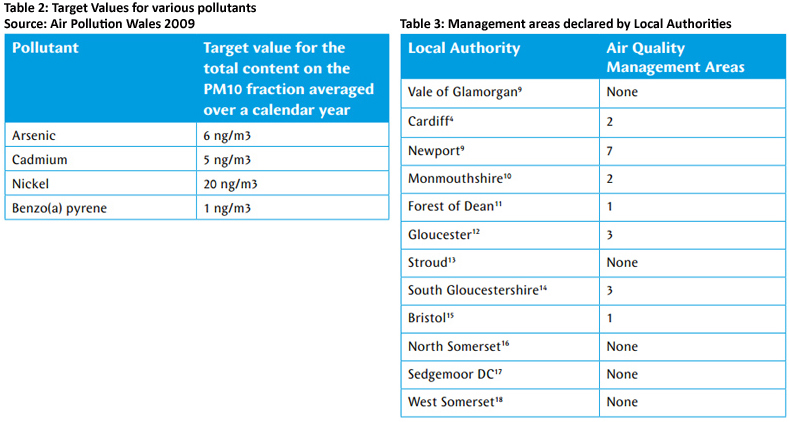 Nationally, air pollutants are primarily monitored because of their effect on human health and ecosystems. However, some pollutants can also contribute towards climate change and these impacts have to be taken into account when planning national and local abatement strategies1. 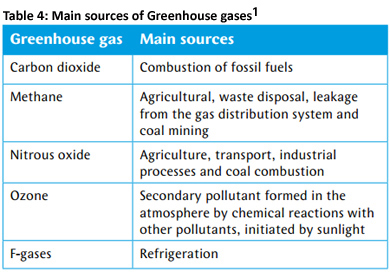 Greenhouse gases (see Table 4) contribute to long term global climate change by a process known as the greenhouse effect. Light and heat energy (infrared radiation) from the sun is absorbed by the surface of the Earth during the day, and is released again slowly over time. Greenhouse gases in the atmosphere absorb the infrared radiation and re-radiate it in all directions, including back to the Earth´s surface. In this way heat is trapped in the lower levels of the troposphere, causing warming and higher temperatures than would be experienced if there were no greenhouse gases1 (see section on Weather & Climate Change).