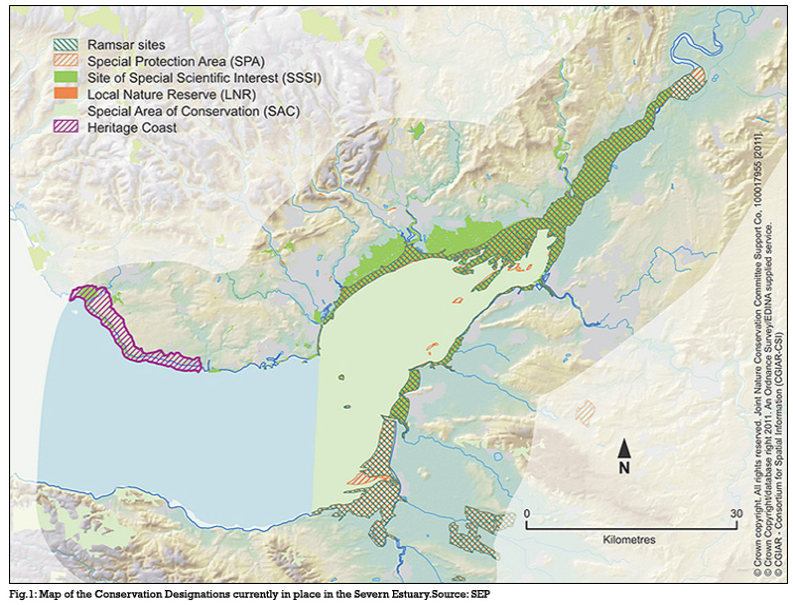 Special Area of Conservation (SAC)
SACs are designated under the Habitats Directive, for areas supporting rare, endangered or threatened species of plant or animal (other than birds) and important habitats.

The Severn Estuary was designated as a SAC on 10th December 2009. Included in its 73,715.4 ha2 is an overarching “estuaries” feature within which subtidal sandbanks, intertidal mudflats and sandflats, Atlantic salt meadows and reefs exist. Furthermore, three species of migratory fish are defined both as features in their own right and as sub-features of the Estuary feature.

Special Protection Area (SPA)
SPAs are designated under the Birds Directive. Such sites are classified for their rare and vulnerable bird populations and for regularly occurring migratory species. SPA areas help guarantee the maintenance of appropriate resources and habitats required to ensure the survival or viability of wild bird species of European importance.

On 13th July 1995, 24,662.98 ha3 of the Severn Estuary were designated as a SPA due to the Estuary’s national and international importance for the breeding, feeding, wintering and migration of rare and vulnerable species of birds. The intertidal mudflats and sandflats, saltmarsh, shingle and rocky shore habitats bordering the Estuary are also protected within the SPA as they support the Estuary’s large bird populations.

The term ‘European Marine Site’ (EMS) is the collective term for intertidal SACs and SPAs. Competent and Relevant Authorities bordering the Estuary have a statutory duty to manage their activities within the Severn Estuary European marine site to minimise impacts and deterioration of the protected features of European importance. Natural England and the Countryside Council for Wales are responsible for providing conservation objectives and advice to the Relevant and Competent Authorities to assist them with their management of the site4. The Association of Severn Estuary Relevant Authorities (ASERA) facilitates these Authorities to discharge their statutory duties in the most efficient and cost effective way possible.

Marine Conservation Zones (MCZ)
The 2009 Marine and Coastal Access Act sets out tools for establishing Marine Protected Areas (MPAs), with the purpose of protecting and enhancing marine habitats and species. Marine Conservation Zones are a type of MPA and are designed to protect nationally important marine geology, geomorphology, wildlife and habitats in the UK’s inshore and offshore waters5. For the Welsh side of the Severn Estuary this project is being undertaken by the Welsh Government via the Marine Conservation Zone Project Wales. For the English side of the Estuary, Finding Sanctuary is coordinating the process for the south-west of England area. At the time of writing, both projects are considering whether additional protection in the form of MCZs is necessary for the Severn Estuary.

Site of Special Scientific Interest (SSSI)6
Sites of Special Scientific Interest (SSSI) are the best examples of our natural heritage, of wildlife habitats, geological features and landforms. They are intended to form a national network of areas, representing in total the parts of Britain in which the natural features, especially those of greatest value to wildlife conservation, are most highly concentrated or of highest quality.

The study area has numerous coastal SSSIs (see Fig.1) that cover a very varied assemblage of designated features, from plants to geological formations. The most notable amongst these is the Severn Estuary SSSI that covers approximately 15,000 ha of foreshore and inter-tidal habitat and forms part of a larger area which includes the Upper Severn Estuary SSSI and Bridgwater Bay SSSI. Also within the Estuary, are the three island SSSI’s of Sully (near Barry), Flat Holm and Steep Holm. Other coastal sites include Aust Cliffs, Brean Down, Portishead to Black Nore, the Gwent Levels and the 675 ha of coastline, from Blue Anchor to Lilstock (North Somerset). A significant new notification in 2010 was the Newport Wetlands SSSI. Its wide variety of habitats including inter-tidal foreshore covering 865 ha, was created as part of the compensation for the loss of the Taff/Ely Estuary SSSI at Cardiff Bay following the completion of the barrage in 19994.

Area of Outstanding Natural Beauty (AONB)
AONBs are protected areas of high scenic quality which aim to enhance the natural beauty of the landscape. AONBs are designated solely for their landscape qualities (including landform and geology, plants and animals, landscape features and the rich history of human settlement over the centuries). There are two AONBs that extend to the shores of the study area8 – the Quantock Hills AONB includes approximately three miles of the North Somerset coast near Watchet and the Wye Valley AONB surrounds 72 miles of the River Wye from just below Hereford, downstream to Chepstow. The Hills were designated in 19569 for their distinctive character, natural beauty and cultural heritage.

Heritage Coasts
Heritage Coasts are stretches of outstanding undeveloped coast. They are not protected by law, so are ‘defined’ rather than designated, but they are given special consideration by Local Authorities in planning decisions for example. There are two Heritage Coasts within the Estuary; the Exmoor Heritage Coast covering 34 miles between Minehead and Combe Martin and the 14 mile Vale of Glamorgan Heritage Coast between Aberthaw and Porthcawl10. 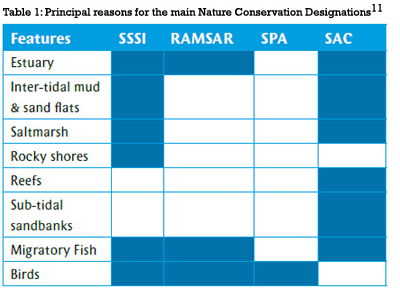 Site of Importance for Nature Conservation (SINC)12
Though not protected by law, SINCs are considered within the planning system. They are designated by local authorities to provide an important link to statutory designated sites and provide green corridors throughout urban areas.

Local Nature Reserve (LNR)
In the middle of the Estuary, the island of Flat Holm has been a designated LNR since 1975 (and SSSI since 1972). Flat Holm’s natural history and geology is both interesting and important. Some of the notable features are; coastal limestone grassland; cliff ledge habitats, wild leek and a
colony of breeding Lesser Black-backed gulls. The Cardiff Biological Database contains over 2,000 records for Flat Holm, mostly of plant and bird species13