The importance of the Estuary

With its world renowned tidal range the Severn Estuary provides an extremely dynamic estuarine environment for many species. This high energy Estuary carries an immense volume of sediment (estimated at 30 million tonnes on the largest Spring tides)1. The deposition of this sediment creates and maintains the mudflats and saltmarshes around the Estuary which are important feeding grounds for large numbers of wintering wildfowl and waders migrating on the north Atlantic flyway1. The Estuary acts as a resting and re-fuelling station for the birds with many staying here for the entire winter as the mild climate keeps the Estuary free from ice.

During peak times, the Severn Estuary can be one of only 6 British estuaries to accommodate more than 100,000 waders2.

With an overall assemblage of about 94,000 waterbirds (excluding gulls), the Severn Estuary Special Protection Area (SPA) supports populations of European importance of 6 species which over-winter and one passage species – as well as populations of a further 11 species which are of national importance. The designation as a Ramsar site (see section on Nature Conservation Designations) also denotes its importance for 4 waterbird species and breeding gulls3. 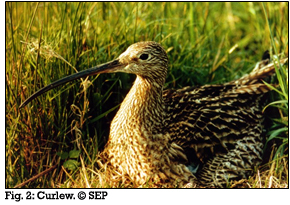 Whilst the majority of the species that forage intertidally are widely distributed across the Estuary, some species favour certain sites, attracted by specific sources of food. Special adaptations allow species to feed in different ways (see Fig. 1). Curlews, with their long bills, feed by touch; capturing lugworms buried deep in the mud (see Fig.2). Other species, such as the Dunlin are visual feeders, which simply run quickly across mudflats and saltmarshes to catch surface prey using their short bill3. The former take larger prey, and the latter smaller. This reduces competition between species and increases biodiversity. In the winter, Shelduck filter through surface mud to remove tiny snails, which can be found in their  thousands in just one square metre3.

Within the Severn Estuary and Bristol Channel a number of sites are designated nationally and internationally for their populations of waterfowl and seabirds. Such sites include the Bridgwater Bay National Nature Reserve and Peterstone Wentlooge Marshes. 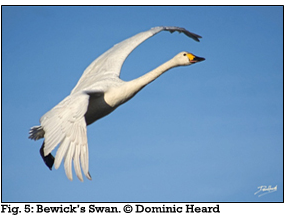 The SPA is designated for sites which regularly support a significant proportion of important populations of Annex I species (see section on Nature Conservation Designations). For the Severn Estuary, these species are Curlew and Bewick’s Swan (see Fig. 5). Curlew can be found in the intertidal mud and sandflats and saltmarshes as they are important for feeding and roosting; particularly those in the upper reaches of the Estuary. Bewick’s Swan populations arrive at Slimbridge from their Siberian breeding grounds to the Severn Estuary in October and can be seen in here until March6.

The Estuary also supports internationally important populations of regularly occurring migratory species such as the Dunlin, Redshank, Shelduck, Gadwall, and the European White-fronted goose6. Numerically, Dunlin is found to be the most important species on the Severn, feeding upon a variety of insects, snails and worms2. In 2010, Shelduck were most abundant in Bridgwater Bay, formerly the most important autumn moulting area for the species away from the Wadden Sea2, in the south-eastern part of the North Sea.

The sheer size of the waterfowl assemblage (>20,000) is also an important part of the SPA designation. Although Ringed Plovers only occur in the Estuary in small numbers during the winter, due to the large passage of migrants through the Estuary in the spring and autumn, this species is still included as part of the Estuary’s SPA6.

These form part of the Ramsar and Site of Special Scientific Interest (SSSI), and include Wigeon (see Fig. 6), Pintail, Teal, Pochard, Tufted Duck, Whimbrel, Spotted Redshank, Ringed Plover, Grey Plover and Curlew. Dense populations of Grey Plover are, in the main, located between Peterstone and the Newport Wetlands reserve, whilst Curlews can be found in the inner Severn; with Bridgwater Bay supporting high concentrations of both species2. The national importance of the lesser Black-backed Gull and Herring Gull breeding populations are features of the Severn too (Ramsar designation6).

As well as being able to see the interesting and varied range of birdlife which appears naturally along the banks of the Severn Estuary, there are also places where the public can go to enjoy important species in specially protected areas and reserves; including Slimbridge Waterfowl and Wetlands Trust (WWT), the Severn Beach area, Newport Wetlands, Cardiff Bay and Bridgewater Bay Nature Reserve.

Slimbridge – The 325ha7 of land within the reserve at Slimbridge, play host to a variety of bird species; such as the Willow warbler, Siskin, Kingfisher and Ruff. In 1962, the Nene (Hawaiian goose), now the rarest goose in the world, was brought back from extinction through WWT’s captive breeding programme and was successfully released into the wild as the first Slimbridge-reared Nene7.

Newport Wetlands – Cetti’s warblers and bearded tits can be seen and heard in the reedbeds of Newport Wetlands, with ducks, geese and swans visiting the reserve in large numbers during the winter8. 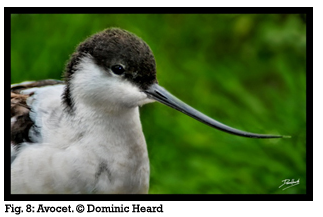 The Avocet, with its distinctive black and white markings and long up-curved beak (see Fig. 8), has been used as the emblem of the RSPB for years; as it represents the bird protection movement in the UK better than any other species. The species’ return in the 1940s and its subsequent increase in numbers, signifies one of the most successful conservation and protection projects in the UK. Wales’ only breeding population of Avocet can be found in the saline lagoons of Newport Wetlands2. Redshank, Lapwing, Oystercatcher, Ringed plover and Little ringed plover are the other five species of wader which also breed in the lagoons; which themselves play host to over 20 migratory wader species in spring and late summer8. 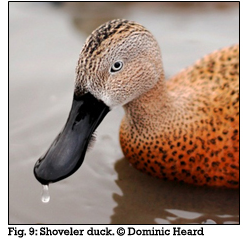 The success of schemes under European legislation, (e.g. Bathing Waters Directive and Urban Wastewater Directive) has significantly improved water quality within the Severn Estuary and UK in general (see section on Bathing Waters). Improvements have been so great, that the occurrence of coastal nutrient limitation has been increasing, therefore reducing the food supply for creatures in the food web which feed the birds of the Severn Estuary.

Bewick’s Swan and White-fronted Geese numbers within the Estuary have also decreased significantly, as wintering sites further North and East in the UK are environmentally similar; acting as a more favourable location as they reduce the need for the species to migrate as far South as the Severn Estuary.

Climate change has more than likely led to declines in the numbers of waders in the Severn Estuary and southwest in general; with the potential loss of wetland and intertidal areas due to sea level rise, resulting in the change of sediment dynamics and loss of habitat for thousands of birds3.