The Severn Estuary and the waters further west to Bridgwater Bay have a very rich fish community with a combined total of 111 species1. Though some of these are probably accidental marine visitors and only rarely observed such as the basking shark and sunfish, with others inadvertently swept downstream from rivers, it is considered that the fish assemblage in the Severn Estuary is one of the most diverse 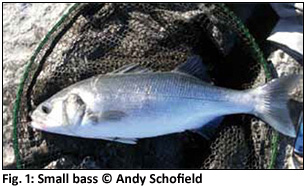 in the UK2. It is also one of the more important nursery areas in Britain3.

Fish species may be categorised according to their lifecycle (see Box 1). The most abundant in terms of both species and overall numbers are the marine estuarine-opportunists4. These rely on the Estuary for some aspect of their life-cycle (primarily juveniles that utilise the Estuary as a nursery) such as sprat, bass (see Fig. 1) and whiting.

Other categories include predominantly marine and freshwater species that stray into estuarine waters, as well as small numbers that are truly estuarine and which are capable of completing their whole life-cycle within the Estuary (e.g. the common goby). The Estuary also acts as a migratory corridor for several important species (see Box 1), such as salmon, lamprey, shad and eel.

Spawning within the Estuary is largely limited to the common goby and possibly also the sand smelt. Many of the abundant marine/estuarine species spawn in the Outer Bristol Channel with the resultant larvae drifting inshore to sheltered waters where suitable food is abundant and there are fewer predators3. It is usual then for the young of the year to migrate seaward in the winter months, in response to reducing salinity and or temperature4. In the case of a number of fish species, in particular gadoid (such as whiting and bass) the seaward migration is closely correlated with and in response to, abundance of the common shrimp4. This pattern of progressive colonisation followed by reduced abundance due to seaward migration can be seen for sand goby, sole, dab, pout, bass, poor cod, whiting and grey mullet. Such species will spend several years migrating between the Estuary and sea, before maturing, with some species then living entirely offshore4 whilst others such as bass, cod and mullet may undertake opportunistic feeding migrations back into the Estuary.

The use of conventional fish sampling techniques for the assessment of the fish population in the Estuary is not a simple matter due to a combination of its size, high turbidity, extremely high tidal range, high flow velocities and large expanses of inaccessible mud and sand flats.

The best fish data collected to date has come from the water intakes at Oldbury (inner estuary) and Hinkley Point (Bridgwater Bay) Power Stations. Fish become entrained on the cooling water-intake screens from where they are collected and recorded. This form of monitoring has an element of bias, but these sources have provided detailed accounts of seasonal changes in fish numbers and species composition over several decades5.

In the case of Hinkley Point where sampling began in 1980 (and is still continuing) the information represents one of the largest time series for an entire animal community anywhere in the world3. Based on the sampling:

The greater numbers of species are thought to be linked with changes in climate. Recent warming may explain the presence of greater numbers of species from the south without, as of yet, the loss of colder water species. In addition, the seasonal presence of some species has been extended because of milder winters7. The reason for the increase in abundance is thought to be largely due to the fact that sediment and water quality in the Estuary has improved, particularly with regard to heavy metal contamination; with increases in water temperatures also likely to be very significant3.

A more targeted estuary-wide monitoring programme jointly conducted by the Environment Agency and Natural Resources Wales started in 2007 where a variety of catch methods are used at thirteen sites twice a year. The results to date (unpublished) show that upstream sites around Gloucester are dominated by freshwater species particularly eel, but have recorded the presence of both flounder and sea bass. At sites downstream of Newnham, estuarine and marine dominate with common and sand goby, mullet, Dover sole and whiting being the most frequently caught.

Additional information, though limited, is provided by the small amount of commercial landings and the largely anecdotal reports from recreational anglers and clubs. 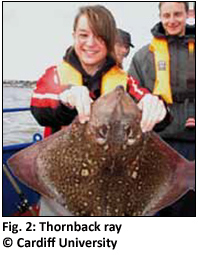 In comparison to the rest of the UK inshore fisheries, a relatively small catch is landed commercially from the Severn Estuary. The landings have however increased over the last five years from approximately 50 to 90 tonnes in 20105. The catch in 2010 was very mixed with rays (see Fig. 2) and bass being the principal species.

Recreational angling accounts for the highest amount of fishing effort within the Severn Estuary and Inner Bristol Channel8. Anglers fish from the shores along much of the Estuary and from charter boats, targeting species such as cod in the winter and bass in the summer. 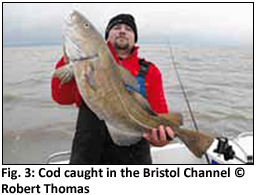 In 2006, the Bristol Channel Federation of Sea Anglers began a database of ‘specimen’ catches caught by affiliated clubs5. A review of its database of recorded specimen catches over the last 5 years, shows an emphasis on elasmobranch species (species with cartilaginous, rather than bone, skeletons) such as ray (small eyed and thornback), spurdog, tope, lesser spotted dogfish and smooth hound5.

In addition, catches of bass, cod (see Fig. 3), mullet, conger, whiting and sole were also recorded. The absence of comprehensive catch records does not allow any detailed quantitative analysis, however interpretations of trends and relative species abundance may be possible5. For example, Table 1 shows periods of abundance in terms of catches of popular species landed on the charter boat Leah James (working out of Cardiff)9. 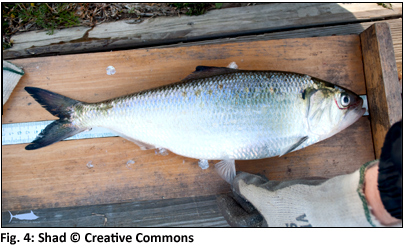 The Severn Estuary and the Rivers Usk and Wye are important conservation areas partly because of the presence of the migratory species: salmon, sea trout, sea and river lamprey, eels and twaite shad (see Fig. 4). The Estuary is an important migratory route for these rare and protected species. As a result of such features, the Estuary is both a site of Special Scientific Interest (SSSI) and along with the Rivers Usk and Wye, also a Special Area of Conservation (SAC). It has also been given the international designation of Wetland of International Importance (Ramsar Site). The above species partly account for the citations.(though not all of them for each designation). In addition to the individual species mentioned, both the Ramsar and SAC designations cite the ‘Estuarine fish’ population, in general, as a key feature.