The Severn Estuary catchment area, that is, the land area draining into the Estuary, covers an area of 21,590 square kilometres1. There are over 600 natural watercourses2; with the main rivers draining into the Estuary being the Ely and Taff (impounded by the Cardiff Bay Barrage), the Rhymney, Ebbw, Usk, Wye, the Severn (the longest river in Great Britain at 354km3), the Avon and the Parrett (not actually within the Severn Estuary but within the study area) (Fig. 1). 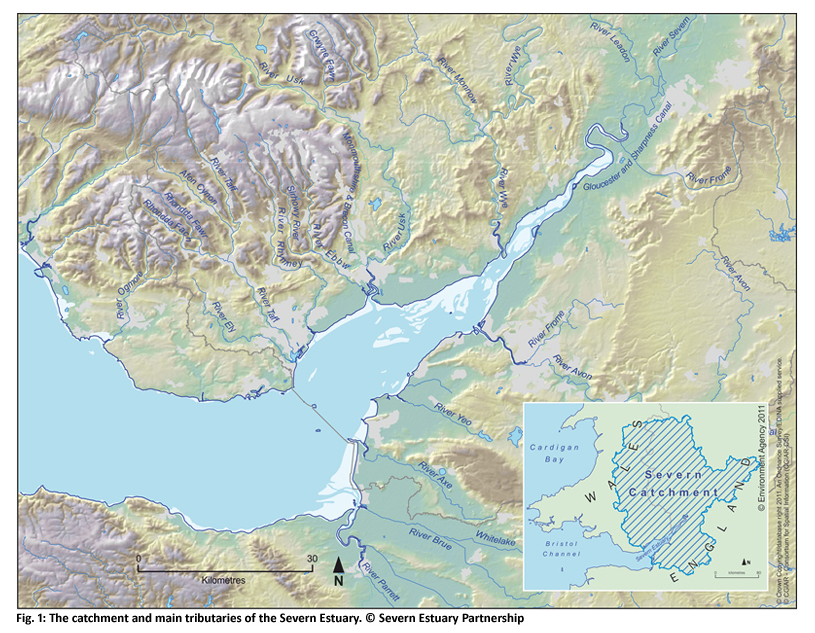 Freshwater inputs to the estuary originate from both surface water 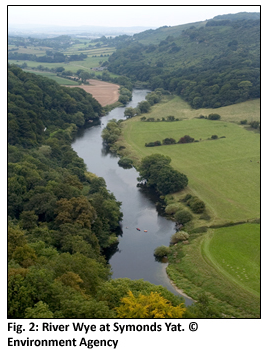 s and groundwater. The groundwater environment along the coast of the Severn Estuary is mainly comprised of low permeability soils overlying low permeability bedrock. Although water can be found within these rocks, in most cases it cannot infiltrate easily. As a result there is limited groundwater resource potential and the distribution of water on the coast is dominated by surface flow processes4.

The main exception to this general pattern is the areas of Carboniferous Limestone which can store and transmit large quantities of water mainly through fractures and joints (see Geology section). There are springs not only on the land surface but also in the Estuary itself, including the Great Spring (intercepted by the Severn Railway Tunnel) which is partly used by Dwr Cymru Welsh Water which is permitted to use a maximum of 10,910m³ per day4 for public water supply3.

The principal input of freshwater to the Estuary is surface water from rivers. In addition, there are also many man-made watercourses. A significant feature is the bordering low-lying land, the water levels of which are managed by an extensive system of drainage channels (termed rhynes in England and reens in Wales). These man-made channels drain to the Estuary, usually at outfalls through ‘sea doors’- many of which experience some restriction of free flow during most high tides5.

Importance of freshwater flows to the Estuary

Estuaries are complex systems in which freshwater inputs have a significant influence on their structure and function. The almost ever-changing river flows and tide levels and the continual mixing of freshwater and marine water generates a complex set of conditions that determine the physical, chemical and biological nature of the Estuary.

There are many impacts that may result from changes in freshwater inflow to an estuary. For instance, a reduction in freshwater inflow may result in saline water and high suspended sediment levels extending further upstream, reduced dilution of major discharges, reduced input of nutrients and organic matter to the estuary ecosystem and low dissolved oxygen levels. These effects will be reversed at times of increased river flows and during periods of particularly heavy rainfall, there may also be an increase in pollutants reaching the estuary from sewer overflows and surface runoff.

The seasonal and more frequent variation of freshwater flow into the Estuary is also important in that these changes are often one of the principal cues for migration both within the Estuary and into the rivers to complete a life cycle stage such as adult salmon entering rivers to spawn. In reverse, slight increases in flow, commonly known as freshets, are often a key parameter for the seaward movement of juvenile migratory fish species. Other cues for movement of many fish and invertebrate species are changes to salinity and temperature, both of which are strongly influenced by the volume of freshwater flow to the Estuary.

In general, the larger the estuary and mean annual freshwater input, the less sensitive an estuary is likely to be to small reductions in river inflow. In the Severn Estuary, possibly the most important effect of reduced river flow or extended duration of low flow is an extension in the upstream intrusion of saline water. It has been stated that the long 1976 drought had no immediate effect on the Estuary, apart from the saline intrusion at Gloucester that risked polluting the public drinking water abstraction from the Gloucester-Sharpness Canal. 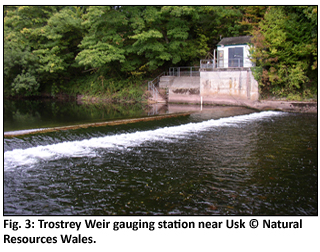 Water flow is commonly measured as the volume of water flowing at a given location every second. In small watercourses and at abstraction points it is usual for the volumetric flow rate to be measured as litres per second, but for larger flows it is normally measured in cumecs, alternatively expressed as m3/s (cubic metres per second).

The Environment Agency in England and Natural Resources Wales are the principal bodies responsible for measuring river flows; this is conducted largely for the management of water resources e.g. water abstraction, and flood risk. River flow or discharge can be measured in a variety of ways; the established method to provide continuity of measurements on the UK’s relatively small rivers, is the use of gauging weirs. Weirs provide a uniform and known river cross-sectional area from which the relationship between the depth of water (called the ‘stage’) and the river discharge can be calculated. The necessary monitoring equipment is housed within adjacent gauging stations (Fig. 3) from where the data is normally sent directly from telemetry systems to the monitoring bodies.

Standard gauging stations are located above the tidal limits of rivers in order to remove any influence of tidally driven flows. The location is determined by many other factors such as construction, access, power supply and the purpose of the data – generally for flood warning and water resources purposes rather than to determine the flow from the river catchment to the estuary. Consequently, the downstream-most gauging station may be a considerable distance upstream of the river mouth and therefore there is often a significant portion of the catchment that is un-gauged; for instance, approximately 5% and 10% of the Ely and Taff catchments respectively drain into the rivers downstream of the lowest gauging stations.

Flows of the main rivers directly feeding the Severn Estuary

Table 1 shows flow data for the principal rivers flowing into the Severn Estuary and for the River Parrett that flows into Bridgwater Bay (included as it is within the study area). Though there are numerous other inputs very few have a daily mean flow greater than 1 cubic metre per second so when compared to the combined flow of the principal rivers, the difference between the total value will be negligible.

It can be seen from the table that the River Severn is the largest single source of freshwater to the study area with 40.73% of the total 2016 input; this figure increases to 42.4% when the flow of the River Parrett is excluded (as it is west of the Estuary). 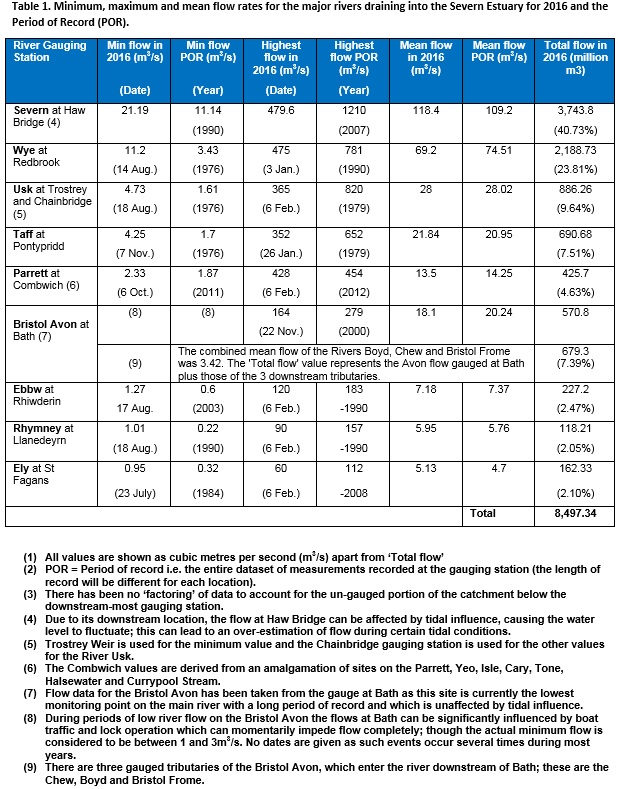 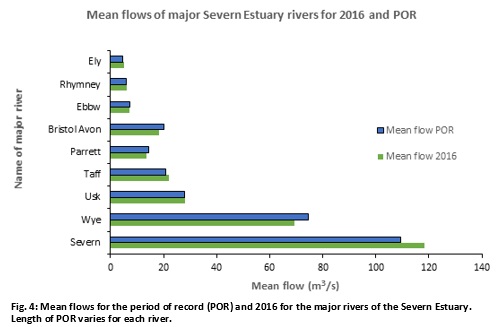 Water abstraction is the removal of water, permanently or temporarily from rivers, lakes, canals, reservoirs, underground rocks (aquifers), an estuary or the sea on the open coast. Not only is water essential for human life (public and private water supplies); it is also an important economic driver and an essential requirement for industry, power generation, commerce and agriculture. 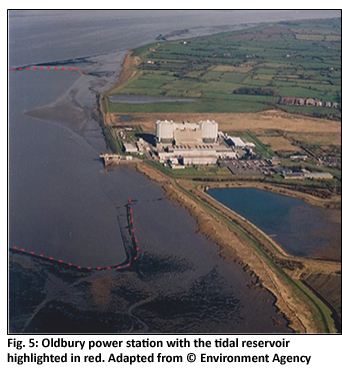 However, abstraction needs to be managed responsibly to meet the reasonable needs of water users while leaving enough water in the environment to conserve the water body ecology.

Freshwater is abstracted from all of the major rivers feeding the Severn Estuary. Some uses, such as in heavy industry, have declined; but this has in many places been replaced by the needs of other sectors and there are increasing demands on some rivers such as the Wye and Severn to meet the increasing needs of agriculture and the public water supply.

Most of the freshwater river abstraction points are situated well above the tidal limit. Those close to the tidal limit, such as the large abstraction from the Severn at Gloucester feeding the Gloucester – Sharpness Canal, have to be managed carefully to prevent the uptake of saline water – in this instance made even more important as large quantities of the water from the canal are subsequently abstracted to provide drinking water for much of the Bristol area. There are also major abstractions direct from the Estuary for use as cooling water for the coastal power stations, including the tidal reservoir at Oldbury (still necessary during this current phase of decommissioning); used to retain water over periods of low tide (Fig. 5). Energy providers are seeking to reduce the volumes of water they abstract; for example at Uskmouth power station, where ‘make-up’ water for the high-pressure boilers is piped from the nearby Nash wastewater treatment works as tertiary treated effluent. 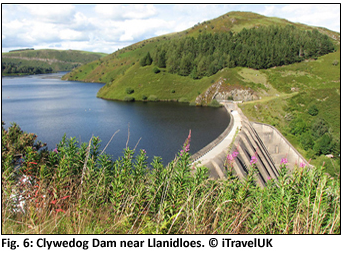 In the 1950s it was realised that predicted demands for water from the River Severn, particularly for public water supply, would be greater than the river could support, especially in dry years7. To increase the reliability of river flow, a dam was constructed in 1966, creating Llyn Clywedog (Fig. 6), a 250 hectare lake in the headwaters of the catchment8 near Llanidloes in Mid Wales. Further water is available from Lake Vyrnwy (approximately 20 miles north of Llyn Clywedog), a reservoir created in 1889 to supply water to Liverpool8. Water released from these reservoirs is then available for abstraction further downstream without river flows falling too low. During a prolonged dry period there may not be sufficient spare capacity in these reservoirs to maintain the required compensatory releases. At such times, additional water from the Shropshire Groundwater Scheme is made available to support the river via a series of large boreholes sunk into the sandstone aquifers from which groundwater is pumped into the river8. This highly complex management of flows is not only to assist continuation of abstraction, but also to protect wildlife and habitats, and to help preserve the natural balance of the river’s ecosystem.

Future changes in UK climate are anticipated to result in hotter mean annual temperatures; with wetter winters, drier summers and higher rainfall intensity overall. By 2050, winter surface water flows are predicted to increase by between 10-15% above current values, in comparison to decreases in summer flows; in the main by over 50% and as much as 80% in some places. It is estimated that these patterns could result in a reduction in total annual average river flow by up to 15%9.

During this same period mean sea level is predicted to rise from 0.097 – 0.63m above baseline9. With the predicted changes in river flow described above, this will result in modifications to the freshwater-seawater transition in the Estuary. A general seaward movement of the interface is anticipated in winter due to the slightly larger predicted winter flows, with a general and slightly greater movement inland in summer9.