Estuaries are complex systems that are comprised of subtidal, intertidal and terrestrial habitats, all interconnected and interdependent.

The Severn Estuary hosts some of the most important and protected habitats in the UK, with its vast tidal range playing a major role in creating the unusual physical conditions of the Estuary. The tidal characteristics not only influence the type and distribution of habitats but also affect the biological productivity of the Estuary. Whilst the Estuary is biologically poor compared with other UK estuaries, its unique set of physical characteristics still create a highly dynamic environment and support a wide range of communities.

The intertidal zone of mudflats, sandbanks, rocky platforms and saltmarsh is one of the largest in the UK and the Estuary’s habitats support internationally important numbers of waterfowl, and large numbers of aquatic invertebrate populations. The Estuary also provides a valuable corridor for migratory fish and acts as a key nursery area for many species (see section on Fish). 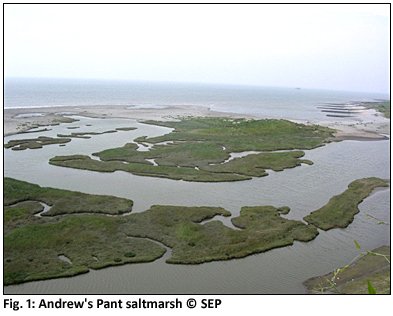 In the UK, the Severn Estuary contains the largest aggregation of saltmarsh habitat in the south and southwest. It covers about 1,400 ha, representing 4% of the total area of saltmarsh in the UK1. Saltmarsh environments fringe the coastline and can be found at locations such as Andrew’s Pant, near East Aberthaw (Vale of Glamorgan pictured above), and Clevedon Pill. Saltmarshes develop where halophytes (plants which are more tolerant to saline conditions than conventional plants) colonise soft intertidal sediments, in areas protected from strong wave action. These halophytes provide important feeding areas for waterfowl.

Saltmarsh habitats are notable for their significance in supporting nationally and internationally important species and are frequently visited by numerous Species of European Conservation Concern (SPEC species), such as the Redshank, and Shelduck (see section on Birds). They also support an array of nationally important rare plant species, including the Bullbous foxtail, and the Slender hare’s-ear (see Fig. 2). 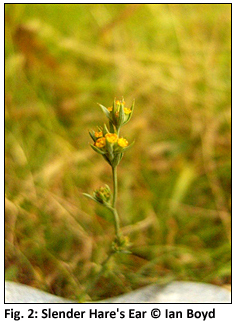 The upper saltmarsh in particular makes an ideal water roosting site, and provides a refuge from the tides that flood the mudflats twice a day. Saltmarshes also support extensive networks of freshwater and brackish drainage ditches, which in turn provide habitats sustaining a vast array of plant species, aquatic invertebrates, and small mammals such as water voles.

The Estuary’s saltmarshes are of international importance, due to their dependence upon a narrow range of environmental conditions, and as such are designated as an Annex 1 Habitat2 and a Biodiversity Action Plan (BAP) Priority Habitat3 (see Box 1 and 2 respectively). In addition to their enormous conservation value, they provide some shoreline protection, acting as soft sea defences, absorbing energy and helping to reduce the risk of coastal erosion and flooding. They also play an important role in the recycling of nutrients through the Estuarine system.

Mudflats, which typically occur within the middle reaches of the Estuary, comprise a large proportion of the Severn Estuary’s intertidal habitat, and can be found alongside intertidal sandflats. Combined, they cover around 20,300ha of the Severn Estuary intertidal area2. They are closely interlinked with saltmarshes and also provide refuge from wave energy and erosion. Mudflats, which become submerged with the high tide and fully exposed at low tide, display a range of specialist species adapted to live in this complex environment. However, as a result of the Estuary’s unique physical characteristics and processes, there are significant differences between the fauna (and particularly the invertebrates) on the Severn Estuary and that of other UK estuaries.

The Severn Estuary mudflats provide important feeding grounds as well as an important roosting and resting area for wading birds and waterfowl. Resident invertebrate communities supply a rich source of food for a wide range of migratory and resident bird populations and fish. However, despite the vast expanse of the Severn mudflats, their diversity (i.e. number of different species) is low; although a small number of specialist species are to be found in relatively high abundance. 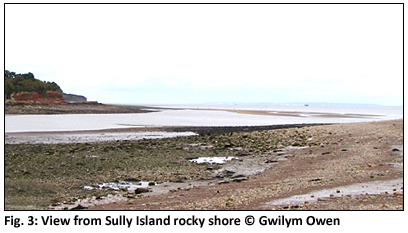 There are extensive rocky shores along much of the Estuary. These intertidal areas are typically comprised of hard substrate such as rocks, boulders, mussel/cobble scars, rocky pools and shingles (see Fig. 3). They represent an extreme environment where harsh conditions prevail due to exposure to tides, waves and wind. However, the variety of substrate coupled with exposure to conditions gives rise to a wide range of habitable conditions for an array of species. The rocky shores of the Severn support a large number of plants and animals, including brown and green algae, barnacles, limpets and winkles. They also provide an essential food source and resting place for a wide range of wintering and migratory waterfowl, such as Dunlin and Redshank. Rocky habitats also provide important roost sites at high tide for species such as Knot, Oystercatcher and Curlew (see section on Birds).

Rocky intertidal areas are a key ‘supporting habitat’ for the conservation of many important species. Due to the internationally important species they support (i.e. Dunlin, Redshank, Shelduck), the habitat is of European significance.

Seagrass habitats of the Severn Estuary are made up of eel grasses. These occur extensively on the more sheltered mixed substrates around the Welsh side of the Second Severn Crossing. On the Severn, seagrass beds are somewhat unique. They occur amongst mixed substrates of cobbles, sands, muds and large boulders; whereas elsewhere such beds are generally associated with mudflats. Two species of eel grass can be found around the Estuary, compared with most other sites where it is more normal for only one species to occur. The grasses provide a productive habitat for a wide range of species, including algae, invertebrates and fish. They also present an important habitat for overwintering birds such as geese and duck and a valuable food source to these important migratory species (see Fig. 4). Both species of eel grass have restricted distribution in the UK.

Biogenic reefs are biological structures created by living species. Studies have revealed extensive biogenic reef systems in the intertidal and subtidal zones of the Severn Estuary, distinguishing the region from other estuaries in the southwest of the UK, where such reefs are largely absent. Intertidal reefs can be found at locations such as Redcliff Bay near Portishead, south of Severn Beach near Avonmouth; and at Goldcliff near Newport. Subtidal reefs occur in dense aggregations throughout the large parts of the mouth of the Estuary4. 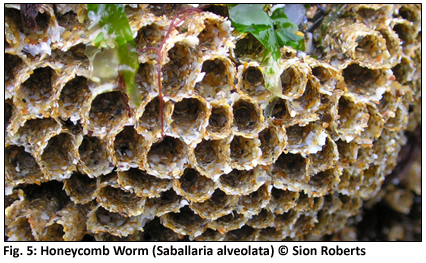 The reefs in the Severn are constructed by tube-dwelling polychaete worms, commonly known as Honeycomb worms (see Fig. 5). These worms construct a network of tubes using sand particles and sediment to form ‘honeycomb’ like structures. The reef building worms live in both intertidal and subtidal areas, and are relatively abundant in the Severn Estuary compared with the rest of the UK.

The reef structures provide a habitat for many other species, often leading to higher species diversity within the reefs compared with surrounding substrates. Their cracks and crevices provide a home for many invertebrates which would otherwise be absent. Crabs, periwinkles, worms, barnacles and anemones inhabit reef structures. Subtidal reefs also support colonies of brittle stars and shrimp. These biogenic reefs are protected as part of the Severn Estuary SAC ‘Reefs’ feature. Protection also serves to safeguard a number of reef dwelling species – protection by association. 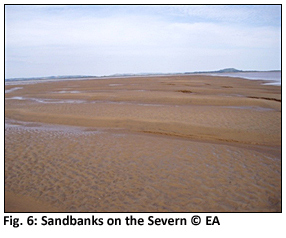 Subtidal sandbanks are permanently submerged features of soft sandy sediments which exist in relatively shallow depths of less than 20 metres. Whilst they are often defined as elevations of the natural seabed, in the Severn Estuary they are highly changeable and mobile due to the extreme tidal conditions. Due to this mobility the sandbanks have somewhat restricted biodiversity. The sandbanks of the Severn Estuary are not only distinct from those in other UK estuaries but they are considered to be some of the best. Despite the severely challenging conditions of the banks, they support very distinctive invertebrate communities, including notable species such as crustaceans, echinoderms (such as starfish) and polychaetes (such as lugworms). Despite only supporting small numbers of plants and animals, their mobility and dynamic nature provides considerable potential for the transport of invertebrate larvae to other habitats across the Estuary. This offers the possibility for species to extend their geographical range across a wider area. Sandbanks are an Annex I qualifying feature of the Severn Estuary SAC under the Habitats Directive, and are also associated with other Annex 1 habitats . It is likely that the subtidal invertebrate communities associated with these sandbanks play a role in providing a food resource for certain fish species featured under the SAC and Ramsar site. Since the banks also occur in depths of less than 20 meters, they represent a depth zone which is easily accessible to feeding waterbirds, also serving as an important nursery ground for an array of fish species in the Estuary.

Studies have shown that there are some significant trends in habitat ecology associated with the region’s changing shoreline and climate. The Coastal Habitat Management Plan (CHaMP)5 for the Severn Estuary, has predicted changes to the Estuary’s habitats over the next 20, 50 and 100 years (as of 2005), arising from a range of natural and semi-natural factors, including climate change. Table 1 outlines net loss and gain for some of the Estuary’s key habitats. Of particular significance is the impact of potential sea level rise associated with climate change. This could lead to a loss of intertidal habitats, namely saltmarshes and mudflats, as habitats become ‘squeezed’ against existing sea defences.

Climate change could also affect reef habitats, especially in the long term. The Honeycomb worm in particular, lies at its northern most range in the UK, with a preference towards warmer waters. With increasing sea surface temperatures, these reef building species could benefit from a slight increase in water temperature, and possibly extend their range. However, with coastal squeeze resulting in smaller intertidal areas, the species might actually find its range reduced. More detailed effects of climate change on Severn Estuary habitats are referred to in the section on ‘Weather & Climate Change’.