Home About Estuary The Use of the Severn Energy Generation

From coal to tidal power, the energy-producing possibilities of the Severn Estuary area have long been a focus of interest. Many of the conditions which contributed to this interest in the past are still present whilst other factors have emerged and evolved to keep pace with technological developments. These have occurred both within the more traditional energy generating industry and with the introduction of new fuel types. As a result of the Estuary area having a wealth of favourable conditions, it continues to play a major role in the provision of UK energy generation, not only in terms of generating capacity, but also in the variety of generating plants and fuel types.

Contributory factors for site selection in the Severn Estuary area: 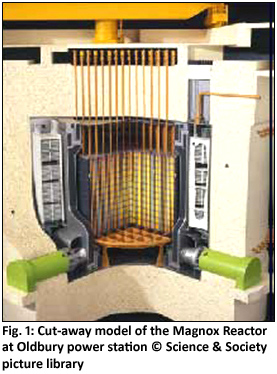 As with the rest of the UK, most of the energy generated in the Severn Estuary area, is in the form of electrical power generated at large power stations specifically for the National Grid. There are also industrial installations that produce electricity on a smaller scale, principally for on-site needs, but are able to supply the National Grid with any surplus. Where industrial processes require both electrical and thermal energy in the form of steam or hot water, this need is often met by a combined heat and power plant (CHP) such as at Dow Corning in Barry.

Some forms of energy generation lend themselves to production at a local and even domestic level. Advances in technology has led to a surge in the last ten years of small installations producing largely renewable energy from such as wind turbines, landfill and sewage gas, biomass, hydropower and solar. Due to the number and relative small output capacity, only a selection of these forms of energy generation and installations is discussed below. For more information on such schemes and particularly the renewable energy sector in SW England, see Further Information at the foot of this section.

Atomic energy provides approximately 18% of the electricity consumed in the UK1. The Severn Estuary area has been one of the principal areas of nuclear power generation within the UK since the first generation of nuclear power stations in the 1950s.

Hinkley Point B on the Somerset coast has two Advanced Gascooled Reactors. It began generating electricity in 1976 and is anticipated to close in 20232. It is currently operating at a reduced maximum electrical output of 870 megawatts (MW), approximately 70% of its design capacity2. 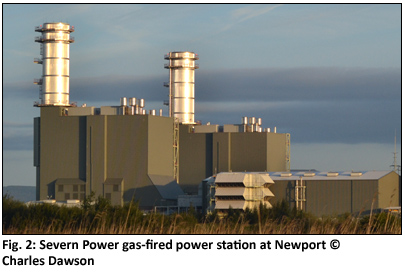 The older Hinkley Point A, built between 1957 and 1965, ceased operations in 20003. All fuel has been removed and the plant is being decommissioned. Oldbury, on the upper Estuary, began producing electricity in 1967 and was originally due to cease generating in 2008, but it continued to operate until February 2012. Both its reactors are now being defueled.

The Magnox station at Berkeley, near Sharpness, has long ceased generating. Completed in 1962, it was the third nuclear power station to open in the UK. It closed in 1989 and was the first to be decommissioned in the UK. Defueling ended in 1992 and it is now in a ‘care and maintenance’ phase, which is due to last until 2074.

The Uskmouth Power Station (originally known as Uskmouth B) at Newport was first operated in the early 1960s and is now the UK’s oldest coal-fired power station. Refurbishment in 1998 extended the plant’s life by around 25 years . However, one of the three units ceased operation in April 2013, reducing the generation capacity from 360MW to 240MW6. 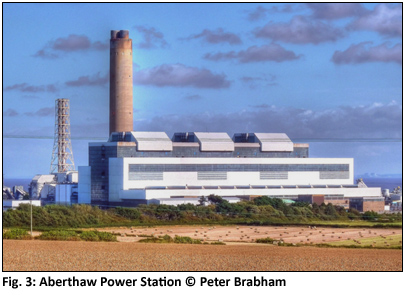 Aberthaw B (near Barry) is a coal-fired power station with a generating capacity of 1555 MW; this is enough power to meet the needs of some 1.5 million people – equivalent to the total populations of five cities the size of Cardiff7.

The plant also uses a variety of biomass products such as sawdust and woodchips as a secondary fuel that is ‘co-fired’ together with the pulverised coal. Since it began full operation in 1971 it has undergone major refurbishments including a seawater flue gas desulphurisation process that removes up to 35,000 tonnes of sulphur dioxide per annum8 and in 2007, new steam turbines were installed. A joint project between Cansolv Technologies Incorporated (CTI) and RWE npower has resulted in the construction of a 3MW carbon capture pilot plant. It commenced operation in January 2013 and following successful commissioning, the process will capture 50 tonnes of CO2 per day7. Aberthaw A power station closed in 1995 and has been demolished.

The gas-fired Severn Power Station, built on the site of the old Uskmouth A Power Station, became operational in November 2010 (officially opened in February 2011). The CCGT plant has a design capacity of 832 MW and has a high generating efficiency of approximately 58%11. Though built next to the River Usk, cooling is not achieved by using river water, but through an air cooled condenser.

The Centrica power station at Sully near Barry is a gasfired CCGT plant. The combined output capacity of both the gas and steam turbines is 235MW12.

Another power plant at Barry is the Barry Cogeneration Plant operated by Npower Cogen Ltd within the Dow Corning Ltd chemical complex. This is a combined heat and power plant (CHP) that produces 28MW of gas and steam turbine generation, as it provides both electrical power and steam for the Dow Corning site – though it can export electricity to the National Grid if required. 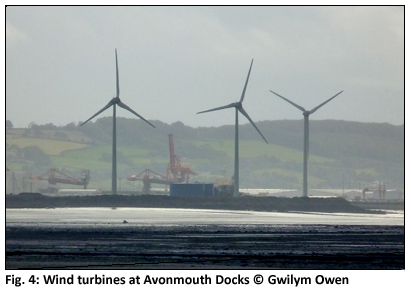 There are two wind power sites with large multi-turbines operating within the Severn Estuary area. At Avonmouth Docks, there are three turbines each with a 3MW capacity rating, that provide up to 50-75% of the port’s electricity demand13.

At Solutia UK Ltd in Newport, two 2.5MW14 rated turbines became operational in early 2010. They are expected to generate a third of the site’s annual average usage and there is the facility to export surplus electricity to the National Grid14. Construction of a second site at Avonmouth commenced in April 2013 for the installation of two 2.5MW turbines.

Methane from sewage sludge at the Bristol Sewage Treatment Works in Avonmouth is used to generate up to 3 MW of electricity mainly to power the site but it also provides surplus energy to the National Grid15. A similar scheme was commissioned in 2011 at Cardiff East Sewage Treatment Works. The anaerobic digestion facility captures the gas from wastewater and uses it to produce 4.5MW of electricity for on-site use16, 17.

The issue of tidal power in the Severn Estuary seems not to have been far from the headlines for the past three decades. The latest debate has again centred on a proposal for a Severn Barrage scheme from Lavernock Point near Penarth to Brean Down near Weston-super-Mare (frequently termed the Cardiff-Weston Barrage).

The latest scheme is being promoted by Hafren Power, a private sector consortium involving major engineering and construction companies. Following the submission of a business case to Government and representation to the Prime Minister’s Office by one of the scheme’s key supporters the former Secretary of State for Wales, Peter Hain, the House of Commons Energy and Climate Change Select Committee were tasked with considering the Hafren Power proposal.

The Select Committee, after taking written and oral evidence from relevant organisations and individuals, published its findings ‘A Severn Barrage?’ on the 10th of June 2013. The report states that although a tidal barrage across the Severn could contribute to energy and climate change objectives, the £34bn Hafren Power scheme had failed to demonstrate economic, environmental and public acceptability. It added that potential environmental impacts had not been adequately addressed, and that although the construction of the barrage was to be privately funded, potentially significant government subsidy for the electricity would still be required for 30 years. The report concluded with the recommendation that the Government should not support the proposed scheme in its present form and that Hafren Power undertake and make available, further assessments.

At the Severn Barrage and Tidal Energy conference in June 2013 in Cardiff organised by the Institute of Civil Engineers a representative of Hafren Power stated that whilst it was disappointed with the findings of the Select Committee, it will continue to promote its scheme and work towards meeting the recommendations of the report.

In addition to the Cardiff-Weston Barrage proposal, there continues to be support for alternative schemes to harness the tidal power resource both in the estuary and areas of the Bristol Channel. Some of the technologies involved were presented at the Sustainable Severn conference held at the University of the West of England in Bristol, in April 2013.

For further information on tidal power in the Severn Estuary, including links to the reports and conferences, please visit our Tidal Power Resource Page. 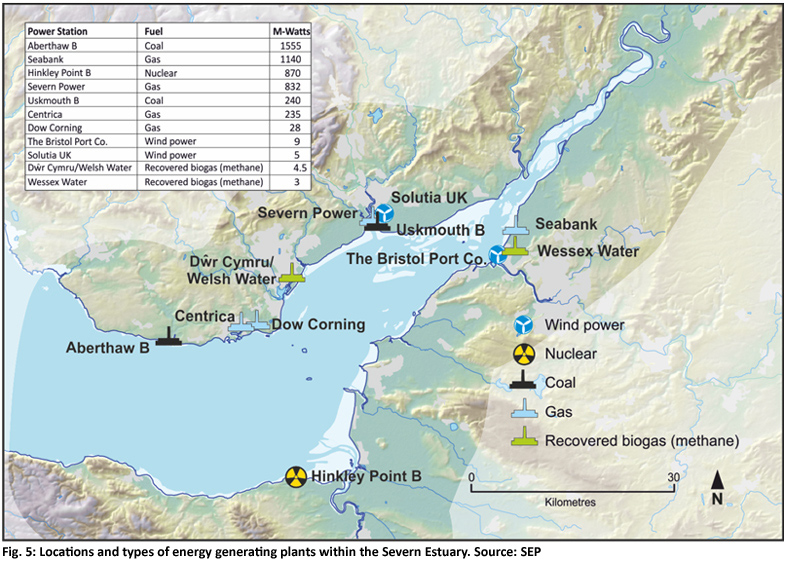 Interest in establishing energy generating plants within the Severn Estuary area looks set to continue as there are numerous proposals to develop sites. Both Hinkley and Oldbury have been identified as possible sites for new-build nuclear power stations. There are proposals for a third large gas-fired plant (1,400MW) at Severnside and construction began in 2013 at a Cardiff site of a municipal waste incineration plant with a design output capacity of 20MW of electricity and an additional 50MW of thermal energy (steam). There are also proposals for the development of more wind turbines along with many smaller schemes utilising renewable energy sources.