Home About Estuary The Use of the Severn Marine Aggregates

Marine aggregate is sand or gravel, used principally as a raw material by the construction industry. In the UK, the majority of aggregate (including crushed rock) comes from land-based sources but since the 1960s, developers have been increasingly reliant on marine sources to supplement demand and meet construction needs1.

The Severn Estuary contains extensive areas of sandbanks. It is estimated that the sand bank system between Newport and Chepstow, known as the Middle Grounds, contain quantities in excess of 1700 million cubic metres2 alone. These sandbanks were not formed by modern processes, but are derived from periods of glaciation and major changes in sea level that ended approximately 4,500 years ago2. Though there appears to be no major modern source of sand3, it is considered likely that limited inputs from the Bristol Channel occur under certain oceanographic conditions.

The pattern of sand supply for construction purposes around the Severn Estuary, particularly in South East Wales, is unique in the UK because of its current and historic dependence on marine dredged resources4. Approximately 80-90% of the demand for natural sand in South Wales is met by marine sources5, compared to about 21% for the whole of England and Wales1. These marine resources are of significant commercial interest as the sand dredged is of high quality, with well sorted grain-sizes and virtually no wastage. There are also significant manufacturing and production benefits5, further supplemented by the industry’s ability to land large tonnages by sea, close to urban areas6. 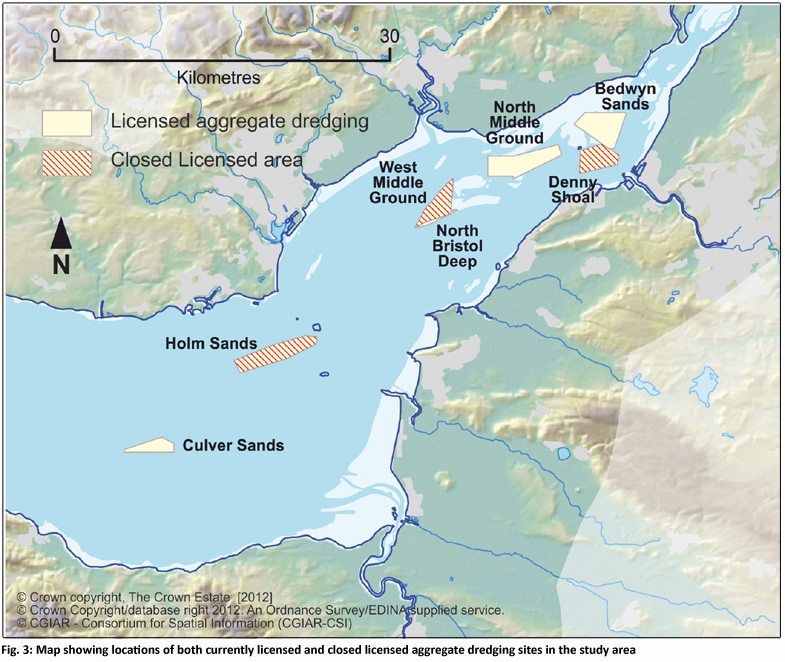 Aggregate extraction from the Severn Estuary is exclusively of sand; the resource consists of well sorted fine to medium grained sand mainly used as building sand. The sandbanks generally contain thick deposits but they mainly exist in shallow water or inter-tidal settings that restrict access to dredgers during low water5.

Dredging ceased at Denny Shoal on in October 2012 and on 30th April 2014 the licence at West Middle Grounds expired and was not renewed by the permission holder.

In February 2015, the North Bristol Deep license holder was granted a 5 year renewal Marine License for the extraction of the ‘unused’ volume; due to the limited tonnage removed, the annual maximum extraction rate was set at 250,000 tonnes.

A renewal Marine License was issued in January 2017 which permitted continued sand extraction at North Middle Grounds with an increase in the maximum annual extraction rate from 150,000 to 250,000 tonnes.

A new Marine License was granted in May 2017 for the continued dredging at Bedwyn Sands at a maximum extraction rate of 250,000 tonnes per annum.

Dredging has occurred at Holm Sands since the mid-20th century and has long been the main contributor of sand and gravel, with a maximum extraction of over 1.5 million tonnes achieved in 1996 and an average since 1991 of 720,000 tonnes. The dredging operators were granted a new 15 month licence from the 1st February 2013 to extract a maximum of just over 422,000 tonnes. The licence expired on 30th April 2014 and was not renewed.

Culver Sands is currently the potential largest production area with a licensed maximum annual extraction rate of 1m tonnes. It is an isolated sandbank of well-sorted medium grained sands suitable for both building and concreting uses.

The combined maximum licensed annual extraction rate during 2016 for the 4 dredge sites was 1,650,000 tonnes. The total volume of aggregate landed in 2016 from Culver Sands, North Bristol Deep and North Middle Grounds was 1,100,309 tonnes. No data is available for Bedwyn Sands, but using the average volume landed over the previous 7 years, the combined total is likely to have been approximately 1,235,000 tonnes, 75% of the combined permitted volume.

The dredged sand is delivered to dedicated sand wharves principally at Cardiff, Newport and Avonmouth, and occasionally at Chepstow and Bridgwater. 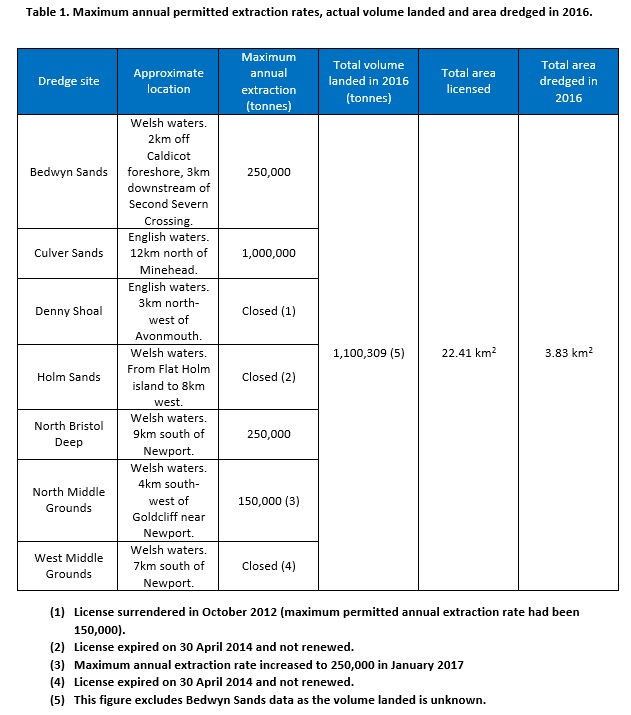 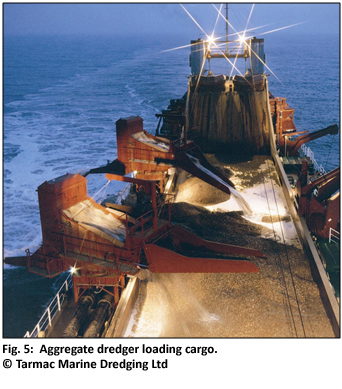 The Crown Estate owns the mineral rights for much of the UK seabed and issues commercial licences for both prospecting and the extraction of aggregates1. However, the planning and consenting process is the responsibility of the regulator; the Marine Management Organisation in England and the Welsh Government administered on its behalf by Natural Resources Wales who, through a consultation process, determine whether an area can be used for aggregate extraction. If it is deemed acceptable, a Marine License is issued under Part 4 of the Marine and Coastal Access Act 2009. The exception in the Severn Estuary is the Bedwyn Sand reserve. This area of sand bank is owned by the Swangrove Estate and lies within the jurisdiction of Gloucester Harbour Trustees (Navigation Authority) and as the sand bank is contiguous with the foreshore, it also falls within the jurisdiction of the local Mineral Planning Authority, Monmouthshire County Council. Consequently, the operator needs permissions from several bodies in addition to a Marine License.