Home About Estuary The Use of the Severn Transport

The Severn Estuary area has an important intermodal transport network bordering its shores. This network has been influenced by the geography and topography of the region and it reflects both the historic and economic developments and requirements of the Estuary over the years.

One of Wales’ main national road and rail network routes runs parallel to the south coast acting as a corridor; joining Wales with Ireland, England and the rest of Europe. The network of roads, railways and ports was initially developed to serve the industrial needs of the South Wales Valleys in the 18th and 19th centuries. Today the road and rail transport networks around the Severn Estuary link the Welsh valleys to the city centres and port areas of Newport, Cardiff and Swansea, whilst in England they follow the main tourism, industry and conurbation districts of Weston-super-Mare, Avonmouth, Bristol and Gloucester.

There have been significant increases in the use of the rail network on both sides of the Estuary for both freight and commuting equally. The Cheltenham to Cardiff route has experienced extra passenger numbers and figures show that the increase in station usage from 2004/5 to 2008/9 from stations at Lydney, Chepstow, Caldicot and the Severn Tunnel Junction is 55.9%2. Extra services and stops have been introduced on this route, particularly at the Severn Tunnel Junction which provides a connecting service for those commuting to Bristol from Chepstow and Lydney.

Existing rail terminals generally have good road connections for freight movements, although the addition of more terminals could reduce the potential problems caused by the ‘final mile’ of a multi-modal transit (the first or last leg of a journey at the origin or final destination). Apart from some bulk commodities, origin and destination locations of freight within Wales are often not directly connected by rail. The electrification of the Great Western Railway including new rolling stock and station improvements has been the largest rail infrastructure development in the region for almost a century. Started in 2009 it was to link London Paddington with Swansea, Bristol and Bath. However, several major elements of the programme have been deferred due to rising costs; these included the electrification between Bristol Parkway and Bristol Temple Meads and Bath Spa, and from Cardiff to Swansea. The works are expected to be completed in 2019. 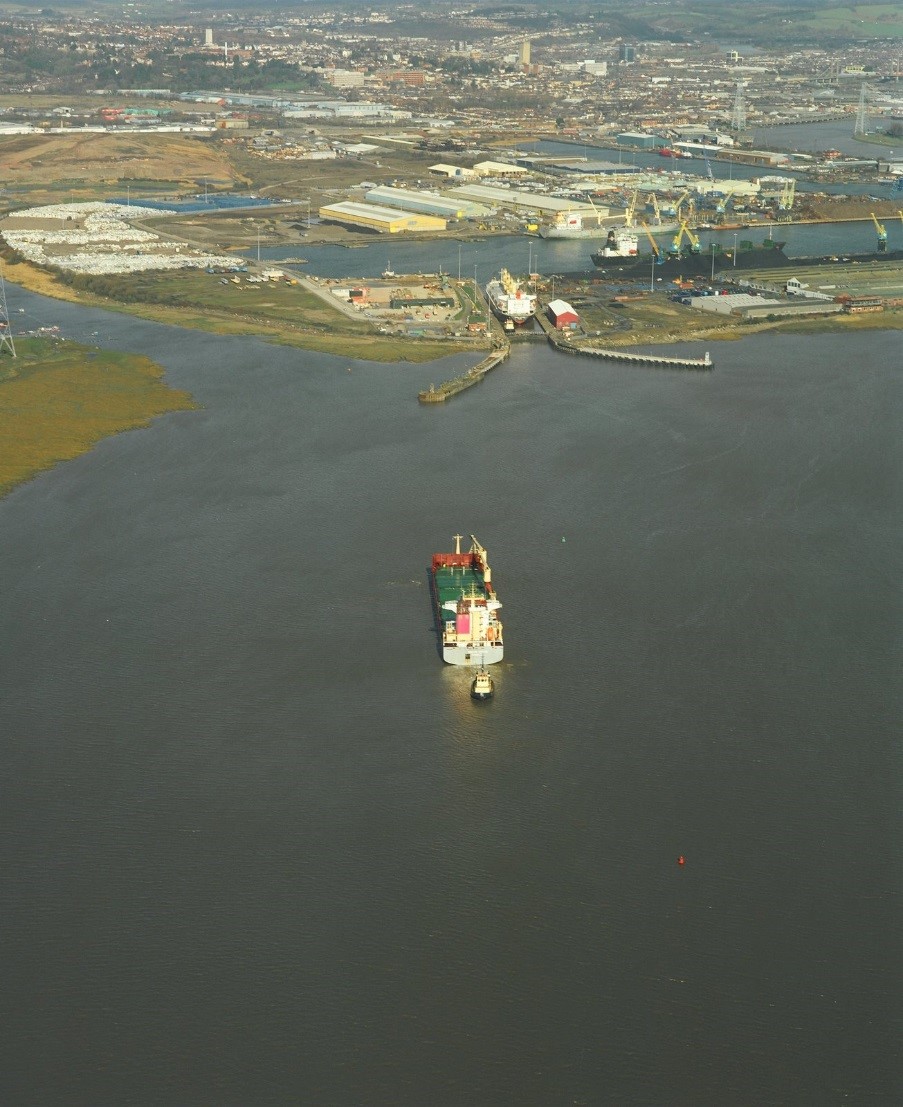 The Severn Estuary ports are well-served by road and have generally adequate rail connections, although there is scope for development. Connections between modes of transport are important when planning the development of new port terminals. Cardiff, Newport, Bristol and Sharpness are the main ports within the Severn Estuary, responsible for handling a substantial proportion of UK trade, both domestic and foreign, whilst also acting as important players in the local and regional economy3. In general, shipping in the UK is likely to expand as a low-carbon, economical method of both national and international trade3. For more detailed information, see the Ports & Shipping section of this section. 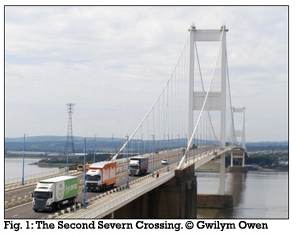 The view of the Upper Severn Estuary is characterised by the two iconic Severn Bridges. The Severn Bridge and Second Severn Crossing are landmarks of the Estuary as well as major transport routes linking South Wales with South West England. The original Severn Bridge supports the M48 and joins Wales with Aust on the English side of the Estuary at the mouth of the River Wye and Chapel Island. The bridge was opened in 1966 to replace the old ferry service crossing from Aust to Beachley4.
In 1996 the Second Severn Crossing (see Fig. 1) was opened to relieve congestion on the local road network, and M5 motorway. New link motorways on the Avon and Gwent sides of the Estuary were constructed to divert the M4 motorway over the new crossing, whilst the existing route over the first bridge between Awkley in England and Rogiet in Wales was redesignated as the M48. The new bridge provides a direct link for the M4 motorway into Wales5.

In January 2018 both bridges were transferred to public ownership (Department of Transport) prompting a toll reduction as VAT was removed. Tolls are expected to be removed completely by the end of 2018.

There are a number of pipelines straddling the Severn which transport oil and gas products. On the Welsh shores, a gas pipeline links Milford Haven to Gloucestershire before joining the wider UK pipeline networks in the Midlands. Across the water, at Avonmouth Docks, tankers discharge aviation fuel into the Bristol Aviation Fuel Terminal which feeds directly into the UK’s fuel pipeline and storage network4.

The Severn Tunnel was built by the Great Western Railway (GWR) between 1873 and 1882. It is 4 miles 624 yd (approximately 7 km) long, although only 2¼ miles (3.62 km) of the tunnel is under the River Severn itself. The Severn Tunnel links South Gloucestershire in England to Monmouthshire in South Wales and is part of the main (passenger and freight) railway line between London and South Wales. 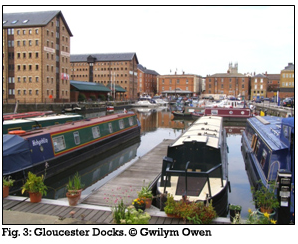 The Severn Estuary is linked to two canals; the Monmouthshire and Brecon and the Gloucester and Sharpness canals. The Monmouthshire and Brecon canal was used during the industrial revolution to transport coal from the mines in Brecon to the docks at Newport. Today the canal is landlocked, navigable and used only for recreational activities between Cwmbran and Brecon. On the English side of the Estuary, the 16 miles of the Gloucester and Sharpness waterway (once the broadest and deepest canal in the world) bypasses the meandering upper stretches of the Severn Estuary to link the commercial port of Sharpness with Gloucester’s historic docks6 (see Fig. 3).

Despite its distance from the sea, the build specifications of the Gloucester and Sharpness canal enabled ocean going vessels to safely reach Gloucester; this allowed the county to compete with coastal docks, resulting in substantial effects on the overall development of the commercial characteristics of the town in the 19th century.

Today vessels can still navigate safely up the estuary through the ship lock at Sharpness, continuing up the canal to Gloucester into a calmer part of the River Severn. Nowadays, many commercial ships end their journey at Sharpness, offloading their cargo for onward transport by water or road6.

The Severn Estuary area is serviced by regional airports on both its Welsh and English sides. Cardiff and Bristol airports operate international and domestic, chartered and scheduled flights.

With more than 50 direct destinations and over 800 one-stop destinations around the world; in excess of one million passengers per year utilise the scheduled airlines and chartered tour operators flying out of Cardiff airport. On average, up to 25 aircraft can take off and land every hour along the airports’ 2,392m long runway. Activities at the airport support an estimated 1,000 jobs. Furthermore, the Welsh Government has defined an area (in which the airport lies) as a ‘centre for aviation excellence’; with various high-profile companies being located within a small radius.

Since the start of 2003, Cardiff has twice been voted one of the Top 10 Best UK Airports in the Telegraph Travel Awards, with 2006 witnessing the establishment of a £7 million enhancement programme.

Several sites in the Bristol area had been used as aerodromes since the 1920s but the current present location was officially opened as Bristol (Lulsgate) Airport in 1957. Growth was relatively slow during the following three decades, but since the 1990s with the building of new facilities including control tower and terminal the airport has established itself as being one of the UK’s busiest airports – ranked 9th in 2016 with over 7.6 million passengers.